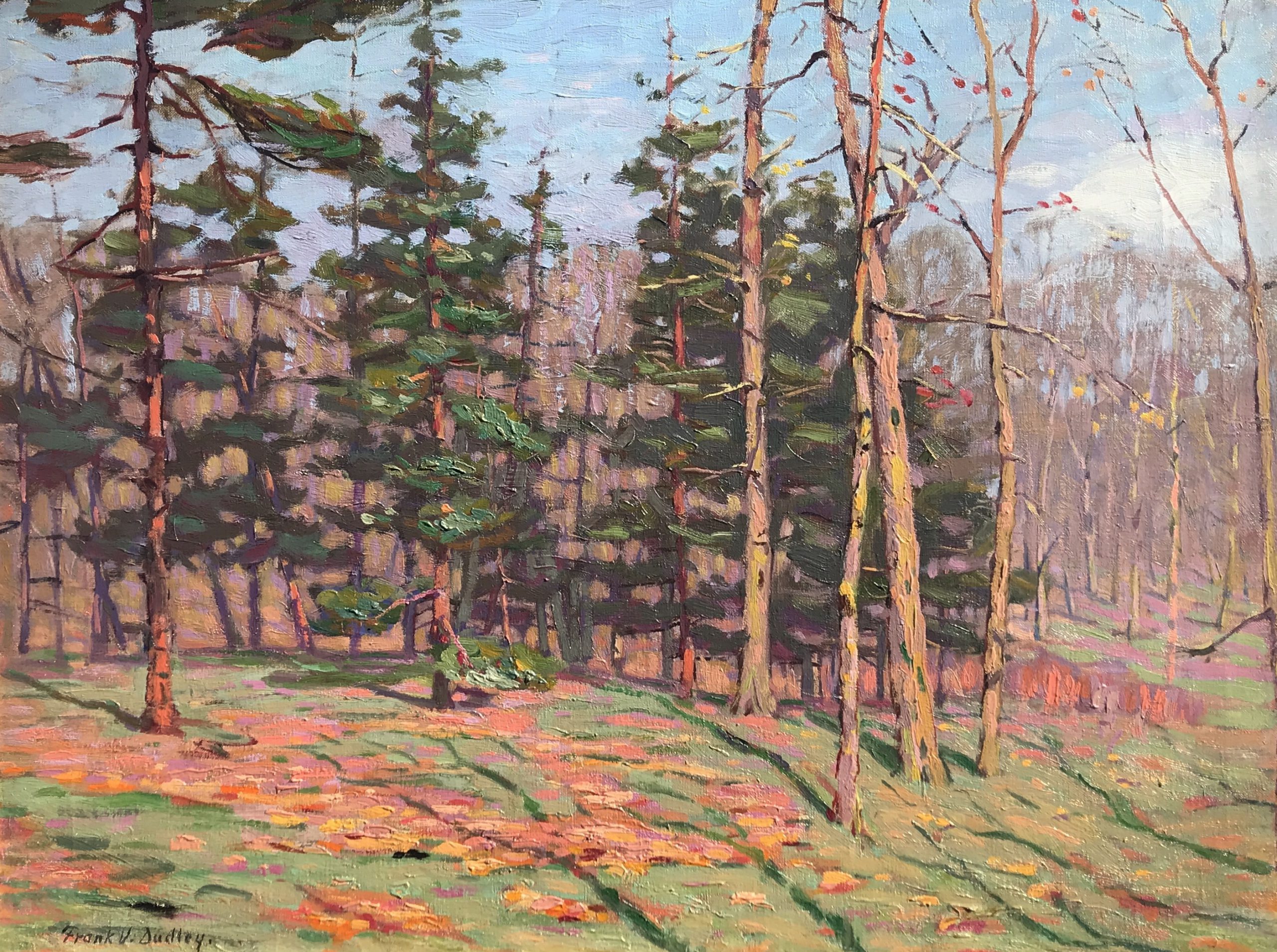 Other Information
Framed: 26 1/2 x 33 3/4 inches
Inscription: Signed lower left
Provenance: Private Collection, Chicago, Illinois.
Exhibited: Chicago, Illinois, Art Institute of Chicago, "Twenty-Seventh Annual Exhibition of American Oil Paintings and Sculpture," November 3–December 6, 1914 (94); Elkhart, Indiana, Midwest Museum of American Art, "Frank Dudley, Early Tonalist Painter," December 10, 2010–February 27, 2011 (10); Saugatuck, Michigan, Saugatuck Center For The Arts, "Land and Sky: Frank Dudley and the Pageantry of Conservation," May 30–August 9, 2013; Valparaiso, Indiana, Brauer Museum of Art, Valparaiso University, "The Indiana Dunes Revealed: The Art of Frank V. Dudley," August 15–November 30, 2006 (14).
Literature: James R. Dabbert, "The Indiana Dunes Revealed: The Art of Frank V. Dudley," Brauer Museum of Art, Valparaiso University, and University of Illinois Press, 2006, Cat. 14, p. 157 (reprod. in color).
Note: Frank Dudley’s "The Sentinels," exhibited at the Art Institute of Chicago in 1914, could be considered a pendant to his somewhat larger "From the Dune Top," exhibited five years later at the Art Institute. Both paintings show a line of conifers, in the Pine family, for Dudley a trope he used throughout his Dunes paintings to represent sentinels or guardians of the Dunes that “serve as stand-ins for human observers, witnesses to the slow transformation of the landscape through the struggles of contending natural forces.” (Greenhouse, in "The Indiana Dunes Revealed," 2006).

Following his commitment to the Indiana Dunes preservation movement at the 1917 Dunes Pageant, 1918 was a successful year at the Art Institute when Dudley exhibited at both the annual Chicago and Vicinity Exhibition in February/March, and his solo exhibition in May/June that included "The Guardians of the Dunes," another sentinel painting. He continued with five more Dunes painting at the beginning of 1919, including yet another sentinel painting "From the Dune Top."

When Dudley submitted his fourth sentinel painting to the more prestigious annual American exhibition at the end of 1919, it was immediately accepted. "The Silent Sentinels" was a more complex painting, with his sentinels reaching full height out of the picture plane. A steep dune foreground adds to the perception of height and provides compositional depth with Mount Tom in the distance. Dudley earned his first major Art Institute prize, a first step towards a national reputation.––James R. Dabbert