Wilson Hurley, a resident of New Mexico from 1935 until his passing in 2008, is recognized as one of America's premier landscape painters. Working in the great American landscape tradition, he has often been compared with Albert Bierstadt, Frederick Church, and Thomas Moran, the great landscapists of the 19th century. Though honored by the comparison, Hurley creates paintings which are truly contemporary in that they combine the realistic beauty of nature with the best of 20th century technological achievement, thought and expression. Hurley is credited with bringing Western realist landscape painting to the forefront of American painting. His influence on current and future generations of artists is incalculable. His work embodies the spirit of Western individualism and presents his experience, enthusiasm and appreciation to all who see his paintings so that they, too, may understand his extraordinary perspective.

Hurley, whose artistic talents were apparent at a very early age, has often been described as a "renaissance man". While pursuing successful careers in engineering and law, Hurley quietly developed his art. As the age of 40, Hurley turned to painting full time. The accomplishments he has achieved since are both innumerable and impressive. Among the awards presented to Hurley by the National Academy of Western Art are the 1984 Prix de West for his painting Los Alamos Country, and the gold medal for oil painting in 1977, 1978, and 1984. The National Cowboy Hall of Fame presented him with the 1977 Trustees' Award for his contribution to Western Art. The Eiteljorg Museum of American Indians and Western Art presented him with the award for Excellence in Western Art in 1991. He has had one-man shows at the Albuquerque Museum of Art and History; the National Cowboy Hall of Fame and Western Heritage Center in Oklahoma City, Oklahoma; the Panhandle-Plains Historical Museum in Canyon, Texas; the Gilcrease Museum in Tulsa, Oklahoma; the Whitney Museum in Cody Wyoming; the Rockwell Museum in Corning, New York and the Eiteljorg Museum of American Indians and Western Art in Indianapolis, Indiana. 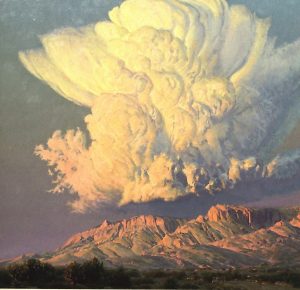