Considered one of America's foremost marine painters, William Ritschel's presence as a resident artist on the Monterey Peninsula added greatly to the substance and prestige of the California art community.

He was born in Nuremberg, Bavaria, Germany, and was educated at the Latin and Industrial School in Nuremberg.  As a young man, he roamed the sea as a merchant seaman, and reflected on canvas what he saw and experienced.  He studied at the Royal Academy in Munich as the pupil of F Kaulbach and C Raupp and earned great renown in Europe for his paintings.

In 1895, he immigrated to New York City and from there was nationally recognized for his marine subjects.  He was closely associated with Childe Hassam, J. Alden Weir, Edward Redfield, and Willard Metcalf, and others who were pursuing the Impressionist style of painting.  He joined the Salmagundi Club and the New York Watercolor Society.

Beginning in 1901, he traveled the West including Arizona where he painted The Grand Canyon and scenes of Navajo country.  In 1911 he settled in Carmel, CA while continuing to exhibit on the East Coast and in Europe.

An active exhibitor in the major galleries, art associations, and expositions throughout California and the United States, Ritschel also received international acclaim in his time. Awarded the Carnegie Prize in 1913 at the National Academy of Design in New York, he was elected a full membership the following year. Already exhibiting in California for several years, Ritschel was awarded a gold medal at San Francisco's 1915 Panama-Pacific International Exposition.

In 1918 Ritschel began building his permanent studio-home "Castle a Mare", perched atop the cliffs overlooking the Pacific Ocean, on a site located just below the present-day Carmel Highlands Inn. From here, Ritschel's inspiration was at his doorstep, and with his masterful brush he interpreted the many moods of the sea in his prize-winning canvases.

This castle-like stone structure was to remain his home for the rest of his life except for trips throughout the world, especially the South Seas where he frequently visited. Ritschel was an eccentric who dressed in flowered sarong and perched on cypress-covered cliffs in California with brushes and easel. He died at his Carmel home on March 11, 1949. 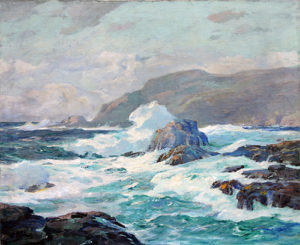 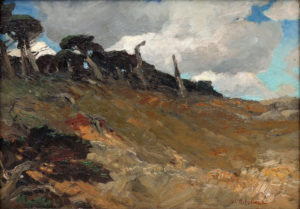