Known as "Professor" Adam, William Adam gave art lessons in his rose-covered cottage at 450 Central Avenue. With a bright and colorful palette of both oil and watercolor, he specialized in views of the Monterey area such as sand dunes, cottage and garden scenes, and the local flora. He was born in Tweedmouth, England and studied under Delecluse in Paris, Brydall and Greenlees in Glasgow, and in Buenos Aires before immigrating to Boston in the latter part of the 19th century. He moved to California in 1894 and settled in Pacific Grove on the Monterey Peninsula. He died there in 1931. He was a member of the Boston Art Club; Glasgow Art Club and exhibited at California State Fairs (medals); the Del Monte Art Gallery, 1907-12; the Berkeley Art Association in 1908; Sorosis Club, 1913; Calif. Artists. His work is in the Silverado Museum at St Helena, California; the Santa Cruz City Museum; the Shasta State Historical Monument and the City of Monterey Collection. Source: Edan Hughes, "Artists in California, 1786-1940" 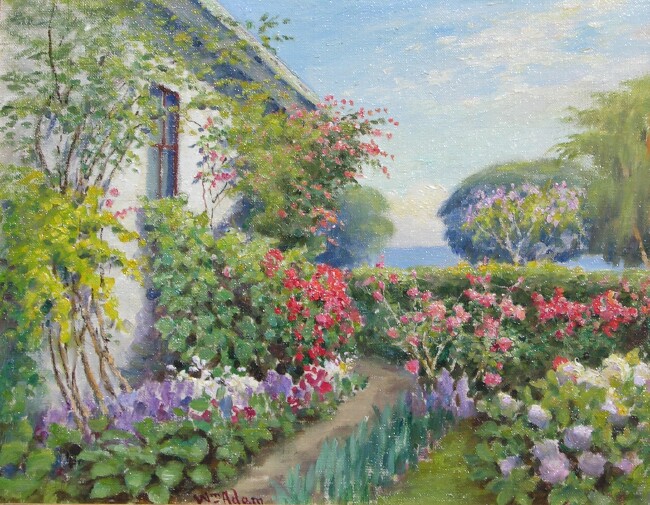