William Berra was born in York, Pennsylvania, the youngest of three children.  His interest in art started in grade school and continued to thrive through high school. Rather than following the usual course of study at the public high school, Berra was fortunate enough to attend the York Academy his junior and senior years.  He then attended the Maryland Institute of Fine Arts in Baltimore, where he experimented briefly with abstract expressionism and non-objective painting.  He discontinued his course of study at the Institute to follow a path of his own choosing, working in a more traditional manner and en plein air.  Berra prides himself on being self-taught and takes satisfaction in having cultivated his own style of painting.

Berra is greatly inspired by his surroundings and enjoys painting on location. When he paints, he begins by visualizing the composition.  As the work evolves, it becomes a composite of visual stimuli, memory and experience.

Berra's paintings have been exhibited extensively in the United States and are represented in private and public collections around the world, including those in Taiwan, Spain, and the U.S. State Department. 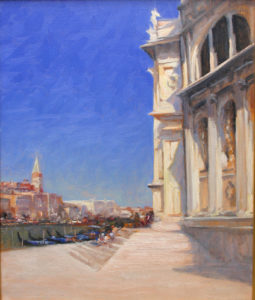