Thomas Waterman Wood, in the company of William Sidney Mount and George Caleb Bingham, is one of America's first artists to find the black man a suitable subject for portrait and genre painting and to portray the black with dignity. Spending several years in the South immediately preceding and during the War Between the States, Wood developed a sympathy for blacks and their dream of freedom. Significantly, Wood may have been the first white American painter to depict free blacks on contrast to the enslaved servants who had appeared as accessory figures in their masters' portraits as early as the eighteenth century. Wood was born in Montpelier, Vermont, November 12, 1823. The family was not wealthy, and the young Wood was obliged to work in his father's carpentry shop. He spent some time as a youth in Boston, where he had relatives, and there he may have studied with portraitist Chester Harding. Embarking upon his own career as an artist, he worked as a portrait painter in Quebec, Washington, D.C., and from the fall of 1856 in Baltimore, Maryland. In Baltimore, Wood painted his first portraits of blacks, depicting free men and women who made their living on the city's streets. His subjects included Moses, The Baltimore News Vendor and Wife of Old Moses (Fine Arts Museums of San Francisco) and Hindoo John with his wares, a basket of apples, hanging on his arm. Wood sailed for Paris in 1858 with every intention of staying in the French academies and in private ateliers. Once there, he pursued a more independent path, sketching in the Louvre and the Galleries Luxembourg. He made the grand tour, visiting Rome, with which he was deeply impressed, and London. Returning to the United States after six months abroad, Wood decided to pursue his career in the South. He settled first in Nashville in the fall of 1859 and remained there through the first year of the War Between the States. He sketched the Federal gunboats that attacked that city in June of 1862. After a brief return to his Vermont home in the summer of 1862, Wood relocated to Louisville, Kentucky, where he made a living as a portrait painter through the war years. Before leaving Louisville, Wood painted a series of pictures which treated the role of the black in the War Between the States. Three of these --The Contraband, showing the runaway slave, eager to enlist, The Recruit, in which the black man stands proud in his new uniform, and The Veteran, a grizzled, tattered, one-legged specimen of war-weary humanity -- when exhibited together at the National Academy of Design in 1867, won Wood his election to that prestigious institution. Wood decided at this time to turn his efforts from portrait to genre painting, and with this redirection he moved to New York City. He threw himself into the bustling art world he found there, while he spent summers at Athenwood, the home he built for himself at Montpelier. In watercolors and oil paints he rendered contrasting aspects of urban and rural life: the darkened street setting of The Drunkard's Wife; the warm conviviality to be found inside The Village Post Office and the playful children in the hayloft of Uncle Ned. There were rewards to establishing himself in New York. Five years after his arrival Wood was honored with election to full Academician status in the National Academy of Design. He subsequently served as vice-president and president of the Academy. He was elected president of the American Watercolor Society as well. Amid the various administrative duties thrust upon him, Wood also found time to teach. One of his students was the wife of Columbia University professor John W. Burgess. Burgess and Wood became close friends, and out of this friendship came the financial backing for establishment of the Wood Art Gallery at Montpelier, Vermont, the artist's gift to his hometown. To fill its walls, Wood traveled to Europe and painted copies after the Old Masters. More significantly to the art appreciative public of today, the Wood Art Gallery houses more than 2,000 original paintings, drawings, and watercolors by Thomas Waterman Wood, one of America's most popular artists of the nineteenth century. Cynthia Seibels 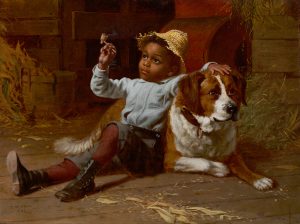