Called the "Artist of the Yosemite" because of his devotion to that seemingly inexhaustible subject, Thomas Hill was born in Birmingham, England on September 11, 1829. After immigrating to the United States in 1884, Hill settled with his family in Taunton, Massachusetts. He studied at the Pennsylvania Academy of the Fine Arts under the tutelage of Peter F. Rothermel. Hill painted in Massachusetts throughout the 1850's and often in the White Mountains of New Hampshire with a group of artists that included Asher B. Durand, George Inness, Benjamin Champney, Albert Bierstadt, Virgil Williams and his brother Edward Hill. For health reasons he was forced to seek a milder climate and, with wife and children, made the overland trek to California in 1861. After settling in San Francisco, he advertised as a portrait painter and in 1862 made his first trip to Yosemite accompanied by William Keith and Virgil Williams. In 1866 he exhibited Yosemite scenes at the National Academy and later that year journeyed to Paris where he was a pupil of Paul Meyerheim and exhibited at the Universal Expo. Returning to the United States, he stayed in Boston from 1868 to 1970, but returned to San Francisco in 1871 to help organize the San Francisco Art Association. While his wife maintained the family home in Oakland, Hill built a studio in Yosemite in 1883. This studio was his home for the rest of his life, except for the winter months he spent in San Francisco where he maintained a studio in the Flood Building. When Virgil Williams died in 1886, Hill became interim director of the School of Design until a new director could be found. During the 1870's and 1880's, his work was in demand and brought very high prices; however, during the later part of his life his work did not command the interest that it once had due to changing art styles. Like Bierstadt, his panoramic landscapes were considered old-fashioned and for half a century or more his work was in eclipse. Today his work has regained its proper stature and he is considered a giant in American art. Although he painted over five thousand paintings of Yosemite, he suffered the first of a series of strokes in 1896 that greatly curtailed his artistic output. During the last three years of his life he needed constant care and was unable to paint. His death on June 30, 1908 in Raymond is believed to have been a suicide. Thomas Hill is buried in Oakland's Mountain View Cemetery. 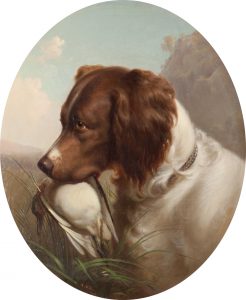 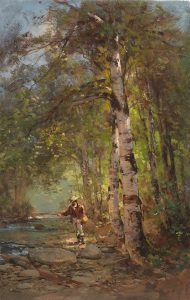