Stanton MacDonald Wright, statement on Synchromisim, 1916
I strive to divest my art of all anecdote and illustration, and to purify it to the point where the emotions of the spectator will be wholly aesthetic, as when listening to good music.
Since plastic form is the basis of all enduring art, and since the creation of intense form is impossible without color, I first determined, by years of color experimentation, the relative spatial relation of the entire color gamut. By placing pure colors on recognizable forms (that is, by placing advancing colors on advancing objects, and retreating colors on retreating objects), I found that such colors destroyed the sense of reality, and were in turn destroyed by the illustrative contour. Thus, I came to the conclusion that color, in order to function significantly, must be used as an abstract medium. Otherwise, the picture appeared to me merely as a slight, lyrical decoration.
Having always been more profoundly moved by pure rhythmic form (as in music) than by associative processes (such as poetry calls up), I cast aside as nugatory all natural representation in my art. However, I still adhered to the fundamental laws of composition (placements and displacements of mass as in the human body in movement), and created my pictures by means of color-form which, by its organization in three dimensions, resulted in rhythm.
Later, recognizing that painting may extend itself into time, as well as a simultaneous presentation, I saw the necessity for a formal climax, which though being ever in mind as the final point of consummation, would serve as a point d’appui from which the eye would make its excursions into the ordered complexities of the picture’s rhythms. Simultaneously my inspiration to create came from a visualization of abstract forces interpreted, through color juxtaposition, into terms of the visual. In them was always a goal of finality which perfectly accorded with my felt need in picture construction.
By above one can see that I strive to make my art bear the same relation to painting that polyphony bears to music. Illustrative music is a thing of the past: it has become abstract and purely aesthetic, dependent for its effect upon rhythm and form. Painting, certainly, need not lag behind music. 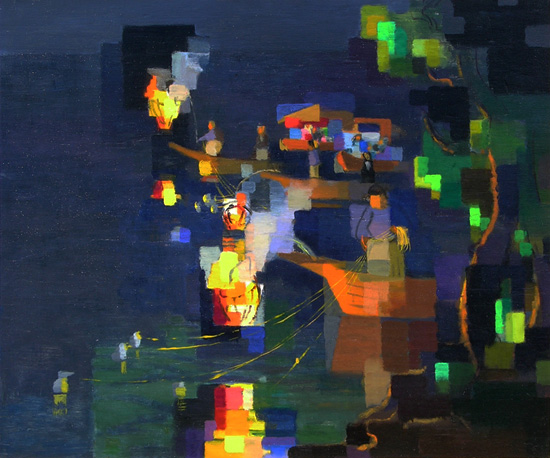 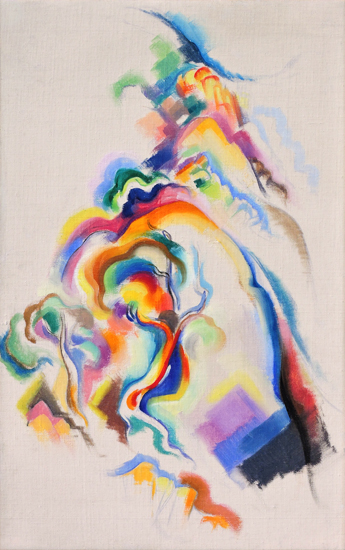