Although a Santa Fe art colony was not established until 1921, the Santa Fe fine art tradition took root simultaneously with that of Taos.  Beginning with the arrival of Carlos Vierra in 1904, artists were drawn to Santa Fe for largely the same reasons as they were to Santa Fe’s more artistically acclaimed neighbor to the north.  Before World War I, Vierra was joined by Kenneth Chapman, Olive Rush, Gerald Cassidy, Paul Burlin and, in 1913, by the New York portraitist Orrin Sheldon Parsons.

Once in New Mexico, Parsons found the terrain of New Mexico irresistible.  In fact the impact of the dry, pure air and bare landscape was sufficiently strong to change Parsons’ entire style.  Parsons gave up portraiture and never again returned to figure painting.  His entire focus became the skies, mountains, and soft, pliable adobe architecture of Northern New Mexico.  He rendered the contours of the Sangre de Cristo Mountains with a soft brush and nearly pastel earth tones.  The only intrusions into this scheme were the extreme, sharp tones of red and yellow needed to capture New Mexico in October.

Parsons quickly became a major force in the burgeoning Santa Fe art scene.  When the New Mexico Museum of Fine Art was constructed in 1917, Parsons became its first director.  He regularly showed his work in the nearby Palace of the Governors galleries alongside that of the many fine artists who spent time in Santa Fe.

Parsons’ career spanned an era.  He was born in the same year as Irving Couse, a charter member of the Taos Society of Artists, one year after the end of the Civil War.  At his death in September of 1943, abstract expressionism was just beginning in New York City.  Through most of these decades Parsons’ style however remained placid, serene, settled and calm, just as he had found the landscape when he first reached New Mexico. 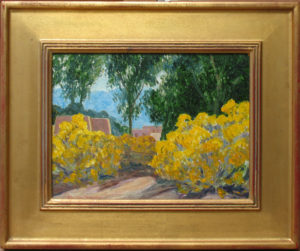 Untitled (Chamisa in Bloom)
oil on board
9 x 12 inches