Salvador Dali is considered as the greatest artist of the surrealist art movement and one of the greatest masters of art of the twentieth century. During his lifetime the public got a picture of an eccentric paranoid. His personality caused a lot of controversy. After his death in 1989 his name remained in the headlines. But this time it was not funny at all. The art market was shaken by reports of great numbers of fraudulent Dali prints. What's all behind it?

Salvador Dali was born as the son of a prestigious notary in the small town of Figuera in Northern Spain. His talent as an artist showed at an early age and Salvador Felipe Jacinto Dali received his first drawing lessons when he was ten years old. His art teachers were a then well known Spanish impressionist painter, Ramon Pichot and later an art professor at the Municipal Drawing School. In 1923 his father bought his son his first printing press.

Dali began to study art at the Royal Academy of Art in Madrid. He was expelled twice and never took the final examinations. His opinion was that he was more qualified than those who should have examined him.

In 1928 Dali went to Paris where he met the Spanish painters Pablo Picasso and Joan Miro. He established himself as the principal figure of a group of surrealist artists grouped around Andre Breton, who was something like the theoretical "schoolmaster" of surrealism. Years later Breton turned away from Dali accusing him of support of fascism, excessive self-presentation and financial greediness.

By 1929 Dali had found his personal style that should make him famous - the world of the unconscious that is recalled during our dreams. The surrealist theory is based on the theories of the psychologist Dr. Sigmund Freud. Recurring images of burning giraffes and melting watches became the artist's surrealist trademarks. His great craftsmanship allowed him to execute his paintings in a nearly photorealistic style. No wonder that the artist was a great admirer of the Italian Renaissance painter Raphael.

Meeting Gala was the most important event in the artist's life and decisive for his future career. She was a Russian immigrant and ten years older than Dali. When he met her, she was married to Paul Eluard. Gala decided to stay with Dali. She became his companion, his muse, his sexual partner, his model in numerous art works and his business manager. For him she was everything. Most of all Gala was a stabilizing factor in his life. And she managed his success in the 1930s with exhibitions in Europe and the United States.

Gala was legally divorced from her husband in 1932. In 1934 Dali and Gala were married in a civil ceremony in Paris and in 1958 in church after Gala's former husband had died in 1952. However from around 1965 on, the couple was seen less frequently together. But Gala continued to manage Dali's business affairs.

In 1933 Salvador Dali had his first one-man show in New York. One year later he visited the U.S. for the first time supported by a loan of US$500 from Pablo Picasso. To evade World War II, Dali chose the U.S.A. as his permanent residence in 1940. He had a series of spectacular exhibitions, among others a great retrospective at the Museum of Modern Art in New York.

Besides creating a number of great paintings, Dali caused the attention of the media by playing the role of a surrealist clown. He made a lot of money and was contemptuously nicknamed Avida Dollars (greedy for dollars) by Andre Breton.

Dali became the darling of the American High Society. Celebrities like Jack Warner or Helena Rubinstein gave him commissions for portraits. His art works became a popular trademark and besides painting he pursued other activities - jewelry and clothing designs for Coco Chanel or film making with Alfred Hitchcock.

In 1948 Dali and Gala returned to Europe, spending most of their time either in their residence in Lligat/Spain or in Paris/France or in New York. Dali developed a lively interest in science, religion and history. He integrated things into his art that he had picked up from popular science magazines. Another source of inspiration were the great classical masters of painting like Raphael, Velasquez or the French painter Ingres. The artist commented his shift in style with the words: “To be a surrealist forever is like spending your life painting nothing but eyes and noses.”

In 1958 the artist began his series of large sized history paintings. He painted one monumental painting every year during the summer months in Lligat. The most famous one, The Discovery of America by Christopher Columbus, can be seen at the Dali Museum in St. Petersburg in Florida. It is breath-taking. The artist's late art works combine more than ever his perfect and meticulous painting technique with his fantastic and limitless imaginations.

Salvador Dali is the only known artist who had two museums dedicated exclusively to his works at lifetime. In 1980 Dali was forced to retire due to palsy, a motor disorder that caused a permanent trembling and weakness of his hands. He was not able to hold a brush any more. The fact that he could not follow his vocation and passion of painting and the news of Gala's death in 1982 left him with deep depressions.

After Gala's death he moved to Pubol, a castle, he had bought and decorated for Gala. In 1984, when he was lying in bed, a fire broke out and he suffered sever burns. Two years later, a pacemaker had to be implanted.

Towards the end of his life, Dali lived in the tower of his own museum where he died on January 23, 1989 from heart failure. 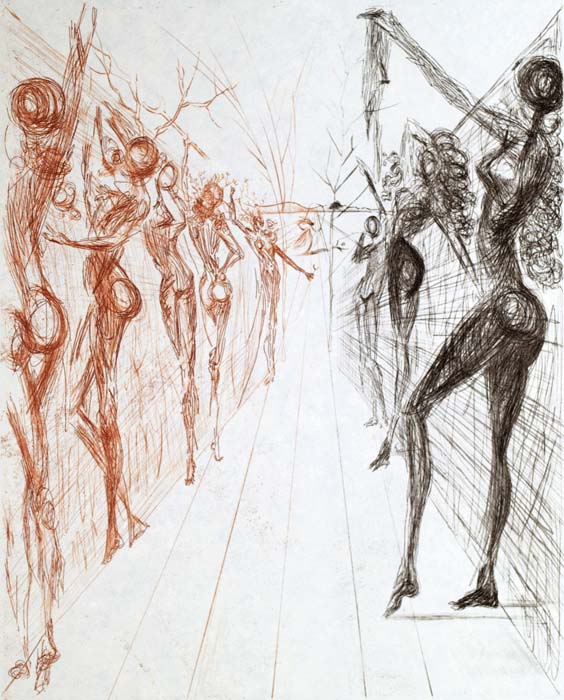 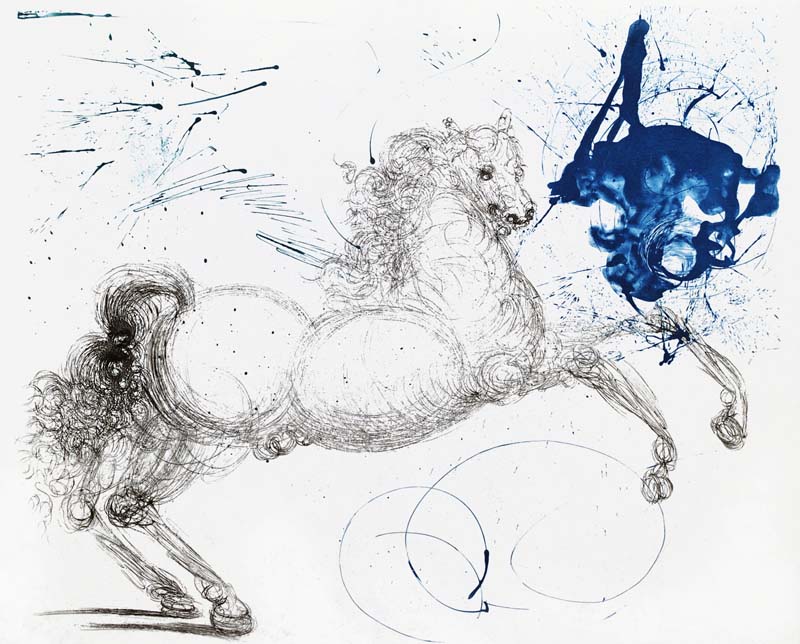 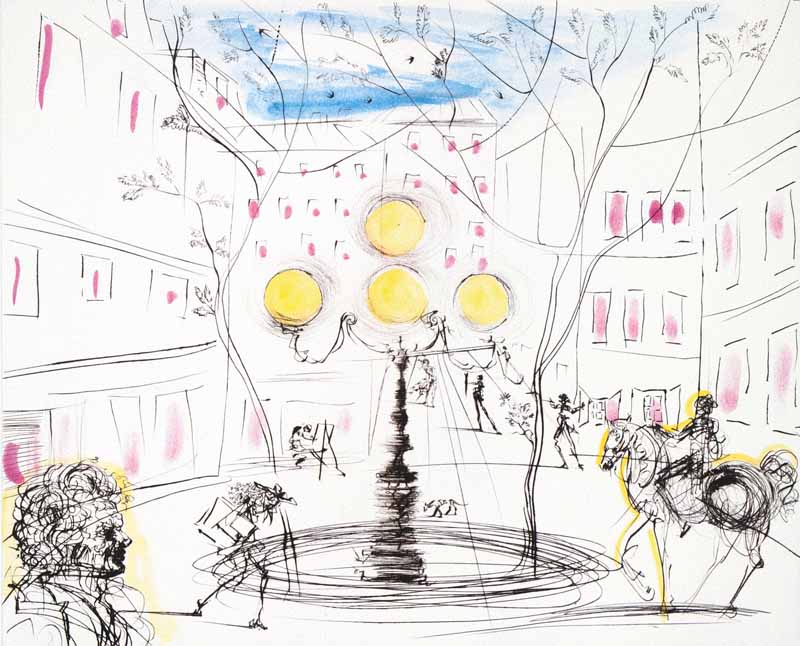 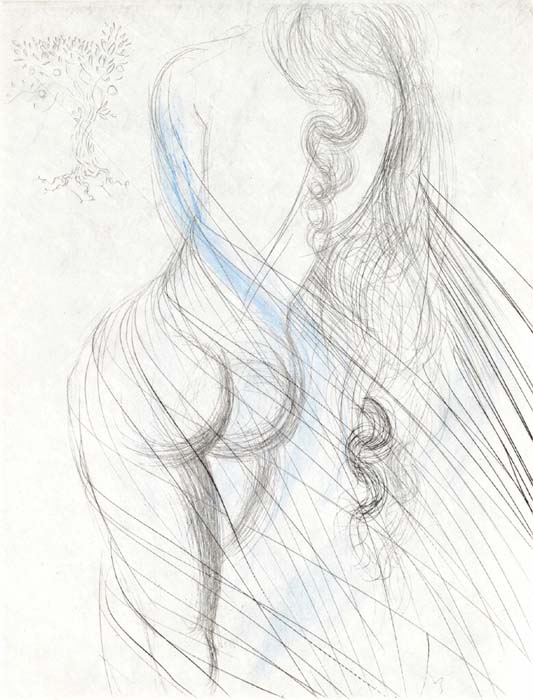