Born in Hangchow, China on April 4, 1911. Yuan began drawing and painting at a young age. Hangchow was the capital of China during the Southern Sung Dynasty. Rich in natural beauty it was known for centuries as a center for the arts. Yuan was the eldest of four children. After the birth of his sister, Yu Sun Shen, whom his parents favored, he was sent to live with his maternal grandparents 40 miles away in Kuchon.

Yuan performed well academically and displayed a talent for art at an early age. His family did not support his interests and wanted him to pursue a more traditional career. Despite their lack of support he was permitted to study at the Fine Arts Academy of the Central University in Nanking with Xu Beihong (also known as Péon Ju), one of China’s most prestigious artists who gave him extensive training in the French academic manner of painting. While Yuan’s studies had been primarily in the Western tradition he was also influenced by the delicacy and emphasis on line that was present in the Chinese paintings that surrounded him.

In 1947 when the war had ended Yuan moved to Shanghai and adopted the English name Wellington because he admired the Chinese diplomat, Wellington Koo, who was the current ambassador to the U.S. It was also in Shanghai where Yuan was introduced to his future wife, Jen-Chi, the sister of his friend Kai-Zhou Lu, a pilot with the Flying Tigers in the Chinese Air Force. He visited the household often and was commissioned by Jen-Chi’s father to paint her portrait. With the Communists taking control of the country, Yuan left China for Jamaica in 1949 where he was principal of a Chinese school. In 1950 he was granted a tourist visa to the United States, and in the following year he moved to San Francisco to work as a cook at the Fairmont Hotel.

In 1952 he visited the Monterey Peninsula and was offered a job at The Highlands Inn. He fell in love with the natural beauty of the area and decided to stay, and in 1953 obtained a better position--teaching Mandarin Chinese at the Defense Language Institute. He succeeded in persuading Jen-Chi to join him as his wife, and on May 23rd they were married at the Church of the Wayfarer in Carmel.  They settled in on the Monterey Peninsula w, making several trips abroad to Europe and Mexico were while maintaining a home and studio in Carmel.  Working in oil and watercolor, he produced still lifes, High Sierra snow scenes, European and Mexican scenes, harbor and beach scenes, and seascapes. His painting style submitted to occidental influence and varied from Impressionism to Abstractionism He is known to have used the pseudonym Zambini.

In 1954 their daughter Rae was born and they purchased a small home in Pacific Grove. In 1955,with his wife’s support Yuan resigned from the Defense Language Institute to paint full-time, and  opened a gallery on Alvarado St. in Monterey; he joined the Carmel Art Association. He signed his early Western paintings "Wellington Yuan" and exhibited widely in the U.S. winning many awards (an abstract painting he entered into the Monterey County Fair under the pseudonym “Zambini” won first prize!)

In 1958 their second child died of a congenital heart defect. Grief stricken, Yuan, unable to paint, put his energy into opening a gallery and restaurant on Cannery Row in Monterey called “Yuan’s.” Unfortunately, there was little demand for authentic Chinese food at the time, and the restaurant soon closed.

His first one-man show was held in 1958 at the Carmel Art Association and received great reviews. In the 1960s he continued to show frequently, opening two separate galleries in Carmel. In 1969 they opened another restaurant “The Merry Peach” at the mouth of the Carmel River. Mrs. Yuan ran the front end of the business, and S.C. Yuan did the cooking. The business supported the family and allowed Yuan to continue his travels.

Yuan was known for being temperamental and moody. He had difficulty dealing with galleries, and the general public. He would price his drawings and paintings erratically limiting sales.   By 1972 his marriage was suffering. To try to improve his marriage Yuan hired an architect to help build a new house, but he was bale to spend much of his time painting on the property while the house was being built, and he continued to exhibit. In 1974 the house was finished, but Jen-Chi refused to move into the house with him. This was very hard for him emotionally, and hee turned to his artists friends for support.  S. C. Yuan hung his last show at the Carmel Art Association on September 4, 1974, and the day after the opening  put a bullet through his head at age 63, the same age his father died. All the paintings from his final show were bought by Yuan’s friends, and fellow artists. He is remembered fondly as one of the most influential artists to paint in Monterey.Member: Carmel Art Association; Society of Western Artists. 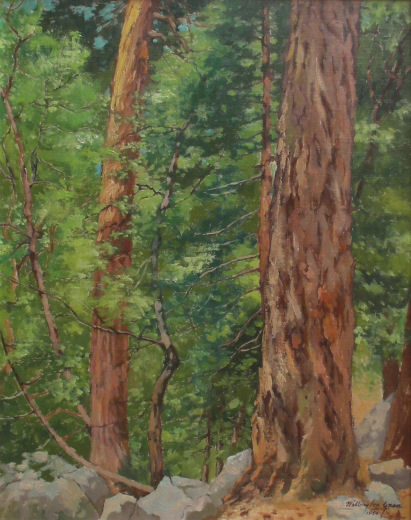 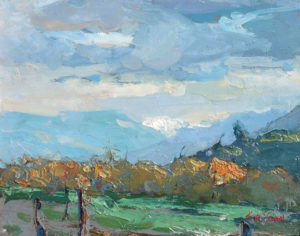 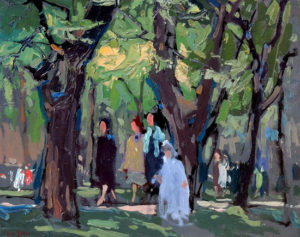