Paul Grimm was born in South America in 1892 and moved with his family to Rochester, New York in 1899. From a young age, he showed promise as an artist, and at 18 won an art scholarship to study at the Royal Academy in Dusseldorf, Germany. In 1919 he moved to Hollywood and began doing design and advertisiting work, as well as painting backdrops for movie studios, in order to support himself. He settleled in Palm Springs in 1932 and remained a resident there for the rest of his life. He maintained a small studio-gallery in downtown Palm Springs, which became a familiar stop for residents and tourists, and most notably President Dwight D. Eisenhower. Grimm's early works depict magnificent views of the California landscape, highlighted by dramatic, cloud-filled skies. He painted scenes of the High Sierra, missions, and Indian portraits, but became best-known for Southern California desert landscapes. Grimm died in Palm Springs on December 30, 1974. Exhibited: San Diego Expo, 1935. Works held: Sierra Nevada Museum, Reno; Bank of America, Palm Springs; Palm Springs Post Office. 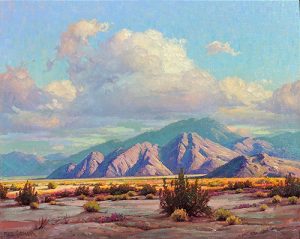 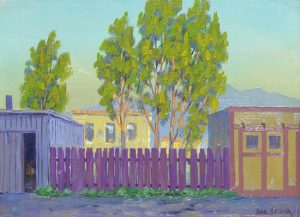 Alley of Ferris Garage
Oil on board
6 x 8 inches 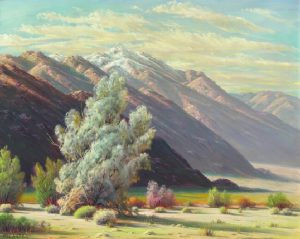 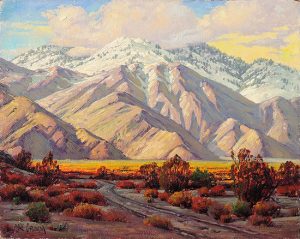