Oscar E. Berninghaus began his career in his native St. Louis as a commercial lithographer.  In 1899, as a reward for his hard work in taking night classes at Washington University and at the St. Louis School of Fine Arts, he was given a month's paid vacation and provided with free passage to the West by the Denver and Rio Grande Railroad.  While visiting Taos, Berninghaus met Bert Phillips, who became a lifelong friend, and was inspired to join the new Taos artist colony.

Berninghaus established a seasonal rhythm based on his family's needs, spending winters in St. Louis pursuing a successful career as a commercial artist and summers in Taos painting the Native Americans, their horses and the landscape.  These candid paintings of Taos earned him great respect among the other artists.  Though residing in St. Louis, he became a founding member of the Taos Society of Artists in 1915 and sent his paintings on tour with their traveling exhibitions.  Successful accounts, especially Anheuser-Busch, allowed him to settle in Taos permanently in 1925.

Berninghaus received the 1924 Ranger Fund Prize and the 1926 Second Altman Prize from the National Academy of Design. He also belonged to the National Society of Mural Painters and the Salmagundi Club. His beautifully rendered paintings offer a vision of Taos of unusual freshness and sincerity. 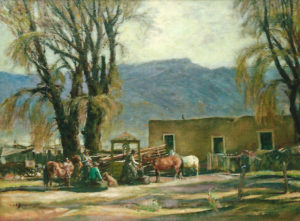