Nicolai Fechin was born in Kazan, Russia, on November 26, 1881. His father, Ivan Alexandrovich Fechin, was a woodcarver who travelled in search of work. He learned to carve, and began drawing images of altars for his father to carve. Fechin often drew at night, though the light bothered his father. After several patient requests, his father would get out of bed, grab little Fechin by the scruff of the neck, and drop him in his bed.

At the age of 13, Fechin won his first prize money, and his parents sent him to the Kazan School of Fine Art. A natural talent, Fechin began to show his genius early. He went on to study with Ilya Repin at the Imperial Academy of Art in St. Petersburg. Repin taught Fechin mastakhi, a technique that involves using a palette knife. This application of paint preserves the visibility of the base layers, and allows color to build rather than mix. It is evident in much of Fechin's work after 1905, and it is part of what made him famous.

After 13 years of schooling, Fechin travelled through Europe, and then taught at the Imperial Academy. He won the Prix de Rome for his painting, Bearing off the Bride, which brought him international recognition. In 1913, he married sixteen year-old Alexandra Belkovich, the daughter of his superior. Their daughter, Eya, was born a year later. Fechin painted many remarkable portraits of his wife and, especially, his daughter. When Fechin and his wife divorced, in 1933, Eya lived with her father most of the time.

The family had migrated to New York in 1923, shortly after the Russian Revolution. In New York, Fechin became a celebrity overnight. However, he developed tuberculosis, and doctors advised him to move west. In 1927, he settled in Taos, New Mexico. He painted Native Americans, and the mountains, and grew very affectionate toward the area. In 1981, his daughter Eya founded the Fechin Institute in Taos, His former home is now a house museum, and the Taos Art Museum.

After the divorce, Fechin went to New York, and then settled in Santa Monica. He died there in 1955, and, years later, Eya took his remains back to Russia. He is a well-loved artist on both continents. 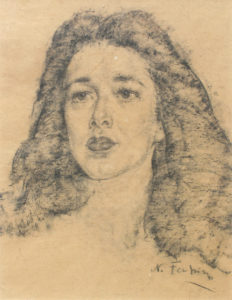