Mary Stevenson Cassatt was born on May 22, 1844 in Pennsylvania into a well-to-do family. During her childhood, the family traveled widely in Europe, lived in France, Germany (1851-1855) and Darmstadt. Returning to Pennsylvania in 1855, the Cassatt family settled in Philadelphia. At the age of 15 Mary decided to become an artist and enrolled in 1861 at the Pennsylvania Academy of the Fine Arts in Philadelphia.

Soon she got frustrated with her American education and decided to study in Paris. Since the Ecole des Beaux-Arts did not admit women, she studied for a short period in the studio of Charles Chaplin, then took private lessons from Jean-Léon Gérôme. She first exhibited in the Paris Salon in 1868. The most important influence on Cassatt in the years before 1875 was exercised by Edouard Manet. Although he did not accept students, Cassatt saw his works and they were much discussed both by painters and art critics.

The Franco-Prussian war (1870) made Cassatt return to the US for the next year and a half. Mary was to spend most of her life in exile from her native country, reflecting a feeling among some women of her generation that Europe offered an escape from what they saw as the oppressive, patriarchal attitudes of America. She was later to say; “After all, give me France. Women do not have to fight for recognition here if they do serious work. I suppose it is Mrs. Potter Palmer’s French blood which gives her organizing powers and determination that women should be someone and not something. The US atmosphere was so discouraging that she almost gave up painting. Late in 1871 she was on her way back to Europe, setting in Parma, where she copied works by Correggio for the archbishop of Pittsburgh. In Parma she spent 8 happy months.

In late September of 1872 she went to Spain studying first the paintings of Velázquez, Murillo, Titian, and Rubens at the Prado, then continuing on to Seville, where she began to paint her first major body of works based on Spanish subjects: Spanish Dancer Wearing a Lace Mantilla, Toreador and others.

After a brief return to Paris in April of 1873, she visited Holland and Belgium, and then traveled back south to Rome. In 1874 Cassatt finally decided to settle in Paris. Aided by her elder sister, Lydia, who joined Mary in Europe, she took an apartment and studio.

Lydia was not only the elder sister, but also the closest friend and model of Mary. There are eleven known works with Lydia, among them are The Cup of Tea, Lydia Working at a Tapestry Loom, Lydia Crocheting in the Garden at Marly, Woman and Child Driving. Lydia died at the end of 1882 of Bright’s disease, and it was a severe blow to Mary.

Cassatt became known as a portrait painter and was sought after by American visitors to France: Portrait of an Elderly Lady. As the sitters are often known, many of Cassatt’s works can be considered portraits: Mary Ellison Embroidering, Reading Le Figaro.. Her work differed from the stiff academic tradition of portrait painting as a mere likeness insofar as most of her subjects were either engaged in some kind of activity or caught in a casual pose.

In 1877 Cassatt met Degas, who advised her to join the Impressionists. “I accepted with joy. Now I could work with absolute independence without considering the opinion of a jury. I had already recognized who were my true masters. I admired Manet, Courbet, and Degas. I took leave of conventional art. I began to live.” A close friendship with Degas began, which lasted until Degas’ death in 1917. Degas and Renoir greatly influenced her style of painting. For a long time Cassatt was even thought of as a pupil of Degas. Though their relations were those of two friends, and the influence was mutual. Once, on seeing some of Mary’s work, Degas said that he would not have admitted that a woman could draw so well. Cassat became the only American whose work would appear with the Impressionists in the exhibitions of 1879, 1880,1881 and 1886.
In 1877 her parents came to Paris to live with her permanently. Success of the IV Impressionist Exhibition, and Cassatt’s in particular, made her father believe at last that the daughter had chosen the right way in life. Between 1879 and 1882 The Independents, as the Impressionists used to call themselves, held their group exhibitions annually, thus providing Cassatt with the opportunity to show her work. In the US she was exhibiting regularly with the Society of American Artists in New York.

In 1890-1891, she produced an important series of color aquatint etchings that show the cycle of women’s lives. This series, which reflects the influence of Japonisme (she herself owned a collection of Japanese prints) established her reputation as a major printmaker. She stopped making color aquatints in 1896-1897; however, she continued to produce drypoint etching until 1911. Like her close friend Degas, Cassatt also excelled at pastels. Throughout her career as a print maker she printed many of her prints by herself on her own press. Her painting aside, Cassatt was consummate printmaker and understood the medium well. She used the color wood block prints of the Japanese masters as her inspiration, thus introducing to Western art the patterning and coloration of Eastern art.

The winter of 1893-1894 found Mary Cassatt in Antibes, recovering from the effort of producing her color prints and the mural for Chicago. It was there she began to paint one of her largest canvases, The Boating Party, which was highly influenced by Manet’s painting In the Boat, which she had persuaded the Havemyers to buy for their collection. At the end of the following year, Mary had her second one-woman show at the Galerie Durand-Ruel in Paris, and she bought the Chateau de Beaufresne at Mesnil-Theribus on the Oise, 27 miles from Paris, which was to be her summer home for the rest of her life.

The two decades around the turn of the century proved to be a highly successful and productive period for Cassatt. She focused almost exclusively on the depiction of mothers and children, these works today are her best-known and most popular, e.g. The Child's Caress., The Bath. Almost all of Cassatt’s mother and child scenes do not depict actual mothers with their own children, since the artist preferred to select her models and match the appropriate physical types in order to achieve the desired results. From 1890 she also produced prints, e.g. The Letter, In the Omnibus, etc. Cassatt’s father died in 1891, and the mother in 1895.

In 1898 Mary returned to the US for the 1st time in over 25 years, visiting relatives, friends and collectors. In 1901 she visited Italy and Spain, in 1908 made the last trip to the USA. In 1910-12 she traveled extensively in Europe and in the Middle East. In 1904 she was accepted into the Legion of Honour and in 1910 became a member of the National Academy of Design in New York. In 1915 she was instrumental in organizing a New York exhibition to fund the campaign to win the vote for women.

Cassatt’s last years were overshadowed with the loss of close people, relatives and friends. She suffered from many diseases, like diabetes and had cataracts on both eyes. Her deteriorating vision caused her to stop painting. She lived in solitude at the Château de Beaufresne, accompanied only by her longtime housekeeper, Mathilde Valet, or in the south of France.

Mary Cassatt died at the Château de Beaufresne on June 14, 1926, and was buried in the family vault at nearby Mesnil-Théribus.

The majority of Cassatt’s works today are in American collections, while just a small number of paintings remain in France, where she worked. Her name is less familiar than those of her fellow Impressionist painters Degas, Monet or Renoir. However, Mary Cassatt is highly original and interesting painter and her talent does not yield to those with well-known names. Cassat is also important for her influence on American collectors, especially the Havemeyers whom she first advised to buy a Degas in 1874 (their large collection of Impressionist works, including a number by Degas, was bequeathed to the MMA). Cassatt recommended Galerie Durand-Ruel to open in New York thus assisting American collectors beyond her own social circle to acquire Impressionist works. She also formed in 1894 the French society of color printmakers with Raffaelli and Camille Pisarro as her co-founders. 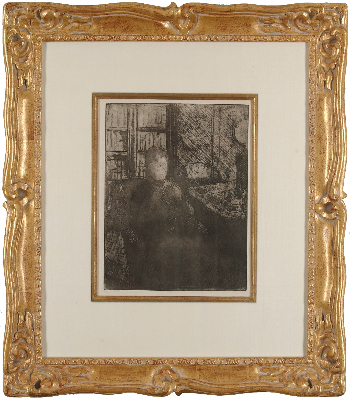