Mark Daily is renowned for his bold and colorful impressionistic brush work.  However, what Daily considers most important is the ability of a painting to evoke a sense of place.  As he puts it, “We figurative painters are so in love with life that what we see is constantly a thrill.”

Daily was born in Chicago in 1944 and from an early age was interested in art, attending summer classes at the Art Institute of Chicago when he was eleven and twelve.  In 1962 he entered the American Academy of Art – also in Chicago – but found that it focused on commercial art more than on the fine art he found interesting.  It was not until 1967, however, upon discovering the paintings of Nicolai Fechin that Daily’s artistic ambitions really took hold.  That year he decided to drive west to Taos.  Inspired by New Mexico and the Taos Society of Artists, Daily lived there for the next nine years building his career as a painter.

During this time in Taos, Daily became friends with other artists such as Ned Jacob, William Sharer and Buffalo Kaplinski.  They started showing together first in Taos and then eventually in Denver.  This group became known as the Denver School and shared a love for plein air painting and drawing.  As Daily recalls, “we painted, partied, traveled, and showed together…it was rare to find an art group as large as ours and with our degree of interaction.”  The Denver School faded out by the early 1980’s.  Daily continues to reside with his family in Denver today.

Daily has an approach to the process of painting which emphasizes the overall emotional responses and physical activity necessary to create a powerful work of art.  Likewise, he views his use of color in broad terms.  Each color finds its place within the context of all the others on the canvas, all working to capture accurately the brilliance of natural light no matter what the subject matter. 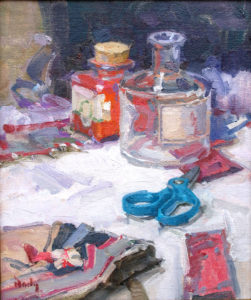