While the “figure” has held a prominent position in the imagery of art since the prehistoric period, the development of 20th century modern ideologies provided the catalyst for the elements of “form”, i.e. color, shape, dimension, and line, to take an equally prominent role as the subject.   Consequently, the artistic language of this period was grounded in abstraction, an alternative style believed to be more effective in addressing the modern concerns of humanity. “New needs require new techniques”, stated Jackson Pollock in defense of abstraction, “…the modern painter cannot express this age-- the airplane, the atom bomb, the radio--in the old forms of the Renaissance or of any past culture”.

For centuries, art relied on the “figure” as a subject, while the formal qualities of art developed separately: the simplicity of Egyptian line, the minute detail of Roman dimension, the exaggerated palette of Fauvist color, and the defragmentation of Cubist shape and composition.  The 20th century abstract artist developed a new vocabulary for expression, one which successfully captured both the nuances of their uncertainty and the confidence of their instinct.  In exploring the formal qualities of art, these artists denounced the figure, or object, as the subject and consequently the art became a reflection of the artist’s inner thought. As Robert Motherwell poignantly stated, “Most painting in the European tradition was painting the mask. Modern art rejected all that. Our subject matter was the person behind the mask.”

Abstract art is infused with the energy, innovation and colors that artistically embody the essence of the changing American nation during the 20th century.  Paralleling the major advances in modern technology, nuclear and atomic warfare, science, photography, and aeronautics, the dominant art of the period suggests an entirely new relationship between the artist, the art, and the viewer.  As a result, a new desire for subjectivity for both subject and form developed, allowing artists the freedom to express their own artistic concerns as finished compositions.  For many, the process of discovery became an “arena in which to act” and therefore the process became equally integral to the work as a finished composition.  As noted art historian Robert Rosenblum stated,”these works are so radical in their breaks with the conventions of the easel picture—they are lighthouses of art that can illuminate a vast territory.”

The artists whose works are included in this exhibition successfully represent the fundamental ideologies associated with the abstract movement within 20th century modernism.  Their representations of both “figure” and “form” remain a testament to their importance within our artistic and cultural history, which has subsequently become the foundation for contemporary visual expression. 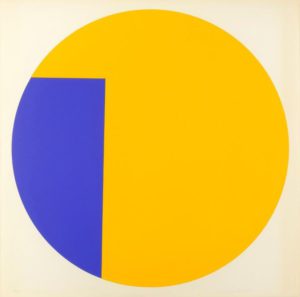