Kevin Macpherson is one of the country’s leading plein air painters and is highly respected among his fellow artists and collectors. Steeped in the American Impressionist tradition, his oil paintings are distinguished by their broad strokes and classic use of color and layering. He is a master of the art of painting outdoors directly from nature, en plein air.

Born in New Jersey, Kevin Macpherson studied at the Northern Arizona University where he received a Bachelor of Fine Arts degree in 1978. He also took numerous classes at the Scottsdale Artists’ School. After years as a successful freelance illustrator in Phoenix, Arizona, Kevin moved to New Mexico to pursue his goals as a fine artist. His home in the mountains east of Taos is the starting point for his frequent worldwide travels.

Along with winning countless Best of Show awards, his paintings have influenced many feature articles in Art of the West, Art Talk, and graced the covers of Southwest Art, American Artist and the Artist’s Magazine. Kevin is a sought after workshop teacher here and abroad, his classes filling years in advance. He is the author of "Fill your Oil Paintings with Light and Color" which, now in its third printing, has become a best seller for North Light Books. Kevin’s bimonthly column, "The Artist’s Voice", is featured in Southwest Art Magazine. His leadership as President of Plein Air Painters of America has brought the organization to the forefront of representational painting. Kevin is the first artist in the Oil Painters of America to be elevated from Signature Member status to that of Honorary Master Signature Member.

Kevin Macpherson has lived a life beyond his wildest dreams because he followed his muse. Paints in hand, he has globe-trotted to over thirty-five countries and counting. Art is his mistress as he travels in search of inspiration. His colorful, compelling oils cross international borders, speaking with the universal language of color. Kevin is a gifted teacher with keen intellect who has influenced thousands of aspiring artists. Through years of writing and teaching, he has crystallized his thoughts into a simple, direct, and highly effective painting method. Kevin can teach anyone to see and paint this visual language. If you have had the pleasure of studying with him, you know his youthful enthusiasm and intense curiosity are contagious.

Kevin is recognized as one of America's most accomplished Impressionistic plein air painters. His discipline and dedication have earned him critical success and numerous awards for his artwork. He is a member of many top organizations and has been recognized for his accomplishments and influence, including Master Oil Painters of America, Master American Impressionists Society, Master member California Art Club, member of the Salmagundi Club and Founding member and first president of the Plein Air Painters of America.

His work has been featured in more than 75 publications, books, television series and video. In addition to writing three popular books on landscape painting he has established stimulating artistic adventures. These include international venues and opportunities such as Chateau des Arts, En Plein Air Masters, Brush with Life and Artist’s Mentor Online and the television series, Passport and Palette.

Throughout his career he has devoted significant energy nurturing the next generation. Today finds him more energized, bringing art and joy to the aspiring hearts of underprivileged children especially in Central America and China with his foundation, “Art Ambassador for a Colorful World,” artambassador.org.

Kevin’s story is still being written. 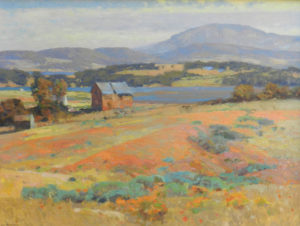