“If you can imagine a point moving, it becomes a line.  A line becomes a surface and a surface becomes a cube.  If you move the cube, this is infinite already because you are suggesting freedom.”

-Maurice Golubov on the “fourth dimension”

The term “fourth dimension”, although technically defined using mathematical computation, generally refers to the infinite relationship between time and space, a primary artistic concern during the early 20th century.  Rejecting the traditions of one-point perspective, artists began incorporating elements of multiple perspectives in their work, essentially departing from their own three-dimensional reality and creating a world of endless possibilities.  Cubism, for example, shattered the picture plane, simultaneously portraying all sides of perspective anchored on a singular plane, “painting not as they saw it, but as they thought it”.

Many artists of the early 20th century began using the fourth dimension as the foundation with which to explore the metaphysical content of geometric symbolism.  They sought to create works which allowed the viewer to simultaneously exist in both the third and fourth dimension, without the use of traditional perspective or the familiarity of subjective iconography. While the fourth dimension in all spectrums of visual art stands as an extension of the infinite, there are many different means of representation, such as time, space, or spirituality.

This exhibition will highlight the successes of mid-20th century artists who worked to represent the ideologies of the fourth dimension within their work, namely Nassos Daphnis, Maurice Golubov, Budd Hopkins, De Hirsch Margules, Irene Rice Pereira, Rolph Scarlett and Charmion von Wiegand. Please visit our website for more information on these artists and others in our inventory.

While being represented by Leo Castelli Gallery from 1958-1990, Nassos Daphnis worked and exhibited alongside some of the most influential artists of the Post-War era, including Andy Warhol, Jasper Johns, Robert Rauschenberg, and Ellsworth Kelly.  Additionally his work is included in the permanent collections of major institutions including the Solomon R. Guggenheim Museum (NY), the Hirshhorn Museum and Sculpture Garden, the Butler Institute of American Art and the Whitney Museum of American Art.

Daphnis created his first geometric abstraction in Paris in 1952, a style which became the future visualization of his artistic identity.  His color theory is dependent upon each color being assigned a density and spiritual value, lending to his work a calculated but visual simplistic co-existence of visual tension and metaphysical implications.

Overlooked as one of the early pioneers of the American abstract movement, Maurice Golubov created an early artistic vocabulary, which paralleled that of Mondrian and the Russian Constructivists, within the confines of his own will and without pre-exposure to any artistic influence.   Golubov’s work was exhibited extensively at the Museum of Modern Art (NY) and the Whitney Museum of American Art in the 1950s and 1960s.  Additionally by 1975, Tibor de Nagy invited him into their stable of modern artists and in 1980 a retrospective of Golubov’s work was held at the Mint Museum in South Carolina.

With an early pre-occupation towards Jewish mysticism and other Eastern philosophies pertaining to the transcendental, Golubov spent his entire artistic career developing a philosophy which reconciled these ideas. Similar to Cézanne, Kandinsky and Mondrian, Golubov felt that art was a spiritual undertaking. Therefore, while formally the “fourth dimension” for Golubov represented a certain freedom of the fixed planar elements from the canvas’ space, it also suggested a realm beyond the physical, that of infinite possibility.

A candid reflection on the artistic career of Budd Hopkins reveals a style imbued with the emotional dynamism of the 1950s, the cool sensibility of the 1960s, and the linear geometry of the 1970s. Works from all points of his illustrious career are in the collection of thirty-two museums including the Guggenheim Museum (NY), The Corcoran Gallery of Art, the Metropolitan Museum of Art and the Whitney Museum of American Art.

Using Léger’s hard-edged style as an influence, Hopkins embraced the harmonious union of angles and circles, blacks and whites versus colors, and flatness with depth.  However, while these works from the 1960s reveal a static moment in time, his later paintings reach towards a multi-dimensional atmosphere, exemplifying Hopkins’ ability to transcend movement on a two-dimensional plane, revealing a struggle for “time and attention” within the space.

De Hirsch Margules became an intrinsic part of the art world in New York City as early as 1929.  His endearing friendship with Alfred Stieglitz, artist and major patron/dealer, allowed him the opportunity to meet and learn from some of the most renowned artists of the period; Stuart Davis, Jan Matulka, and John Marin (who became Margules’ mentor).  Within his lifetime career Margules has had over 30 one-man shows, consistent representation at the Whitney Annuals from 1938-1956, and his work is currently in the permanent collections of major museums such as the Whitney Museum of American Art, the Museum of Modern Art, NY, and the Museum of Fine Arts, Boston.

Margules sought to create a technique which would serve as a new artistic language for the third dimension of physical presence and the fourth dimension of time.  His works have a transcendental quality about them, one which is inherent in perspective and in medium.  The canvas’ which were divided into quadrants observed “the phenomenon of visual time…..the waxing and waning of light, changing all it envelops” ( King, 1963). Other works effectively show his build-up of medium, ultimately expressing the tangibility of the object represented. The impact of the brilliantly vivid color combinations is meant to recreate the psychological impact of the time of day upon the viewer.

Considered a major Bauhaus proponent in the United States, Irene Rice Pereira’s oeuvre reflects her commitment to machine-age materials and a philosophy that called for a merging of technology and the transcendental. Her body of work is expressive of the same industrial aesthetic extant in works by Charles Sheeler, Charles Demuth, and Fernand Léger.  Retrospectives on Pereira were given at the Museum of Modern Art in 1946 and the Whitney Museum of American Art in 1953 and her work is included in the permanent collections of a number of museums including the Metropolitan Museum of Art, the Smithsonian American Art Museum, Guggenheim Museum (NY) and Whitney Museum of American Art.

Rolph Scarlett was the first American artist selected to exhibit alongside Wassily Kandinsky, Paul Klee, and Rudolph Bauer for Solomon R. Guggenheim’s Museum of Non-Objective Painting in 1940.  Scarlett’s acceptance into the Museum as a primary exhibitor and chief lecturer resulted in a close friendship with its founder, Hilla Rebay, who was the driving force for the Non-Objective style being created for the Museum. His works are represented in the permanent collections of numerous museums including the Guggenheim, the Whitney Museum of American Art, the Museum of Modern Art and the Smithsonian.

Throughout his life Scarlett wavered between a style that was representational, Non-Objective, and abstract, the latter representing his true voice and passion.  According to scholar and author, Harriet Tannin, Scarlett created a substantial body of pure abstractions, beginning in the 1930’s and would continue to do them in secret during his tenure of creating non-objective works for Rebay’s Guggenheim.  However, the two Scarlett oils chosen for exhibition at the Whitney Museum’s 1951 Annual were his abstract expressionist works.

As an active member and President (1950-1953) of the American Abstract Artists and a leading artist in the abstract Neo-Plastic field, Charmion von Wiegand is most notably recognized for her use of flat planes, her preoccupation with simple, elementary colors and her fragmented rectilinear constructions. Her work resides in the permanent collections of the Albright-Knox Art Gallery, the Neuberger Museum of Art, the Whitney Museum of American Art and several other institutional and private collections.

She was heavily influenced by her friend Piet Mondrian and worked closely with him to develop his artistic theories. Until his death in 1944, the two collaborated on essays relating to Mondrian’s principles of abstract Neo-Plastic art, which von Wiegand eventually chronicled in her book about Mondrian and his aesthetic. 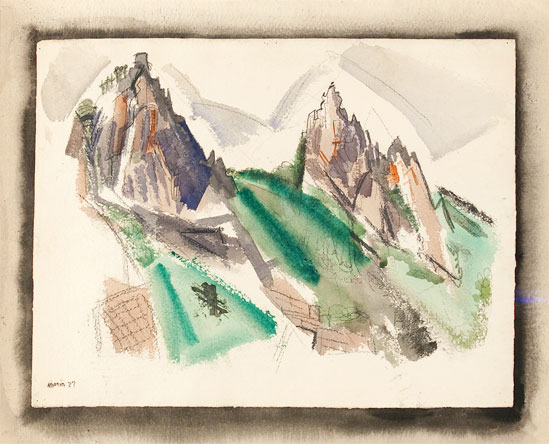 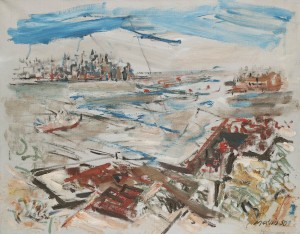