Herman Herzog was trained in the Dusseldorf, Germany school of painting. Having reached a certain notoriety in Europe before coming to America, Herzog can be seen as one of those artists who reverses the normal process of expatriation in our culture, becoming a missionary rather than a refugee. Herzog's visits to Florida between 1885 and 1910, trips made by train to see his son John in Gainesville, resulted in some of his most profound achievements as a painter. Like Martin Johnson Heade he brought a slightly retarded style to the swamps and flatlands of north Florida, imbued with the lingering light of international romantic luminism and altogether appropriate for the exotic locales he so loved to record. Several of his contemporaries, notably George Herbert McCord, developed certain formulaic approaches to landscape art in Florida, particularly the use of certain ongoing naturalistic devices which assume a semiotic importance. In Herzog's art this is most detectable in certain recurring bird and animal motifs. Herzog frequently used herons, both in flight and at rest, and deer, to portray those moments of freedom and spontaneity in nature which so enliven the artist's work. 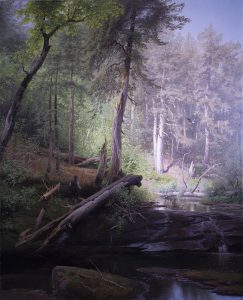