Considered one of the greatest and most influential painters and printmakers of all art history, Rembrandt van Rijn stands out as one of the most solitary and unapproachable personalities, who struck his own style and stamped his influence for all posterity. In his etched works, his unique position is realized to even greater advantage than in his painted works; Hardly any etchers, then or since, achieved the same mastery of medium and expression that Rembrandt possessed. In the range of his genius, Rembrandt still stands alone in art history. Whether a landscape, a genre scene, a religious moment, or a still life—he illumined all with his technical and stylistic powers, never failing to pierce to the heart of things.

Born in 1606 as the ninth child of a wealthy miller in the town of Leiden, young Rembrandt attended Latin school until 1620 and studied at the University of Leiden. Even at a young age, his interest and ability in the arts was apparent, and he came to study with local artist Jacob van Swanenburgh, working for three years to develop his formative abilities. In the early 1620s, Rembrandt spent a precious six months studying with Pieter Lastman, a great artist in Amsterdam. In 1624, the young Rembrandt opened his own studio in Leiden, and he began accepting students in 1627, including Gerard Dou.

As proof of Rembrandt’s individual genius, it is interesting to note that in an age when every young artist made an obligatory trip to Italy, the young Rembrandt did not. As a pupil of the classicist Lastman, he despised the conventional tour. He was convinced that the true realization of his and his country’s art lay in the limited view of the Dutch interior and amid the quiet beauty of uneventful landscape.

After leaving school in the early 1620s, Rembrandt spent several years experimenting with the technique of etching. His earliest undated prints were produced about 1626 and the earliest dated prints were done in 1628. Rembrandt expressed great genius in numerous series of studies, portraits, and Biblical subjects. His etchings numbered more than three hundred and were well received due to the fine detail of the pieces. The execution of the plates was a masterful accomplishment in that time in history.

By 1632, Rembrandt’s reputation was well established. He permanently settled in Amsterdam, and there he received many commissions, allowing him a life of prosperity. In 1634, he married a wealthy woman named Saskia, and for the next ten years, they led a comfortable, happy life of luxury and extravagance, building a family and enjoying the success of Rembrandt’s art. They bought a luxuriously large house in the artistic Jewish Quarter, an indulgence that later contributed to his financial ruin.

Tragedy too soon eclipsed this happy period. In the 1630s, the couple’s first three children died shortly after birth—only their fourth child Titus survived to adulthood. Then, shortly after Titus’s birth, dear wife Saskia died, possibly of tuberculosis. Rembrandt’s drawings of Saskia on her sick and death bed are among his most moving works.

After Saskia’s death, Rembrandt kept other female companions, including Geertje Dircx, who worked as Titus’s nanny, and Hendrickje Stoffels, who began as Remrandt’s maid. Even with small newfound joys, Rembrandt could not escape emotional hardship. Soon after birthing a healthy baby girl, Rembrandt’s faithful companion Hendrickje passed away. Then, just after marrying in 1668, Rembrandt’s song Titus and his young wife both died. The artist was once again all but alone.

Throughout his life, Rembrandt lived beyond his means, buying art (including bidding up his own work), prints (often used in his paintings) and rarities, which probably caused a court arrangement to avoid his bankruptcy in 1656 when he sold most of his paintings and a large collection of antiquities. The sale list survives and gives good insight into his collections, which included Old Master paintings and drawings, busts of the Roman Emperors, suits of Japanese armor among and assorted Asian objects, and collections of natural history and minerals.

In spite of his personal tragedies, Rembrandt never ceased working, the one constant in his life. As an artist, he made no compromises. Indeed, first and foremost, his life was dedicated to his passion for creating art.

Throughout his whole work, Rembrandt accepted all variations of man, woman, and land that lay to his hand. He never sought the external ideal of beauty, which he felt lacked the distinct voice of true humanity. He appreciated that physical realism is less a hindrance than an aid to the rendering of spiritual significance—both religious and secular—in art.

In his lifetime, Rembrandt created countless self-portraits, like a string of autobiographies that reveal the progression of his physical and emotional states. Still today, he is renowned a master of the self-portrait in both etching and paint.

Rembrandt’s etched work can be divided into three periods, each with a predominant characteristic. In the first period (1628-1639), the pure etched line is the most common medium. The young artist was accustomed to holding back exuberant passion, using careful and even restrained draftsmanship.

By 1640, in the second period, Rembrandt’s work with the dry-point, which began in the late 1630s, became a significant factor in his style, and its use in heightening the effect of light and shade is little by little more adequately realized. Attention to the tone of the whole composition, apart from the mere design, is characteristic of Rembrandt’s developing power, though this end is still gained largely by means of close lines of shading.

In the third period (from 1651 through his death), there is a remarkable increase in the vigor and breadth of the handling. The lines of shading are more open, the forms less conventional, and the touch truer, more spontaneous, and less evidently conscious. Drypoint was used as much as etching, and chiaroscuro, now of-the-moment, was often achieved by a more summary method, though still rendered in some plates by closely hatched shading.

In his etching, Rembrandt is open to adapting all elements of life and art that made a passing impression on his mind, which best displays his constant freshness of vision. Like all the greatest creators, he seldom exhibited a need for forced originality. He used familiar themes and felt no compunction at copying other artists. Yet, his reused themes and ideas show a readiness of appreciation, not poverty of imagination.

His pre-eminent place in art depends as much on his untiring powers of self-education as on any extraordinary brilliance of innate genius. While other artists acquiesced in contemporary fame, public, Rembrandt still took infinite pains to re-explore visual paths, sometimes leading him away from general popularity, but constantly reaching for the highest level of human achievement.

as well as countless other museums, galleries, and private collections around the world 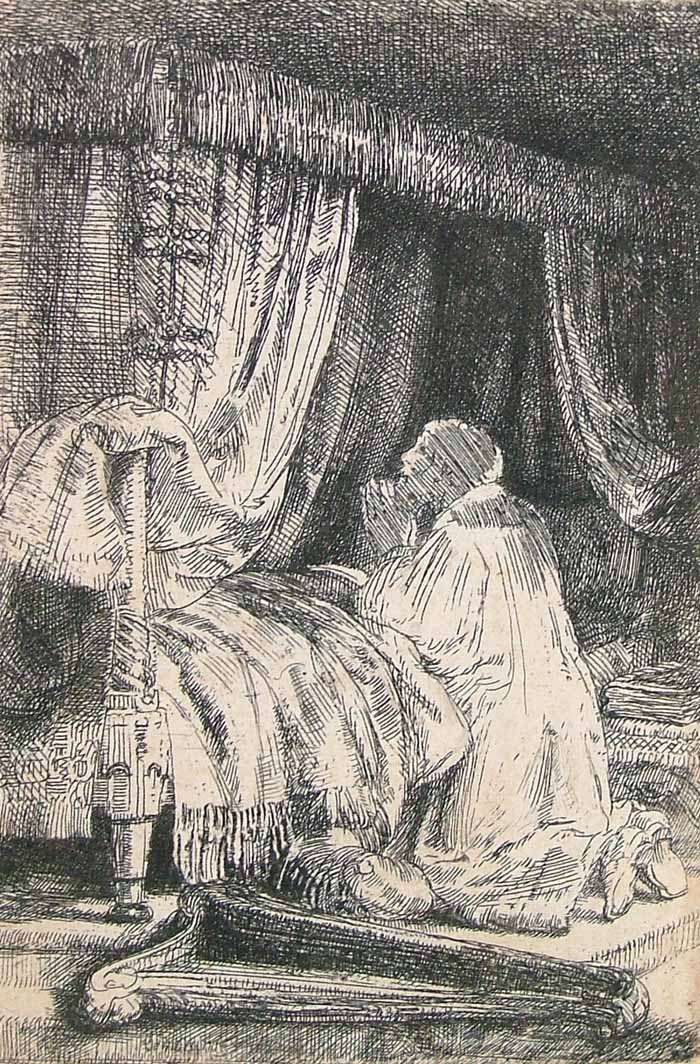