Gunnar Widforss was born in Stockholm, Sweden in 1879. He studied to be a muralist at the Institute of Technology in Stockholm from 1896-1900. In search of landscape subjects, he traveled extensively in Russia, Europe and Africa gaining popular acclaim particularly among European royalty who became important patrons of his earlier works. He remained in Sweden until 1921 by which time he had become a premier figure in the art world. While en route to the Orient in 1921, Widforss visited San Francisco and opted to remain. In 1922 Stephen T. Mather, the director of the national parks, influenced Widforss to make painting America's national parks his specialty. He did just that, and in 1923 illustrated the book "Songs of Yosemite." Many national magazines used his paintings for their covers and his fame in America grew rapidly. He painted the canyons of the Colorado and Yellowstone, Zion and Bryce canyons, the Kaibob forest at Mesa Verde, Taos and Crater Lake but his first love was the Grand Canyon. It was his obsession with the Grand Canyon that prompted him to become an American citizen. He built a studio on the rim of the Grand Canyon and spent his last years there, studying geological formations and painting the beauty that he saw. The paintings from these last years were called "the finest to have come out of the West" and are still highly sought after today. Widforss died on the rim of his beloved canyon at the age of fifty-five and was buried there. He was a member of the California Watercolor Society and the Scandinavian-American Artists. His works are held by many important private collections throughout the world and can be viewed at the Yosemite National Park Museum and the Museum of Northern Arizona which held a retrospective of his works in 1969. 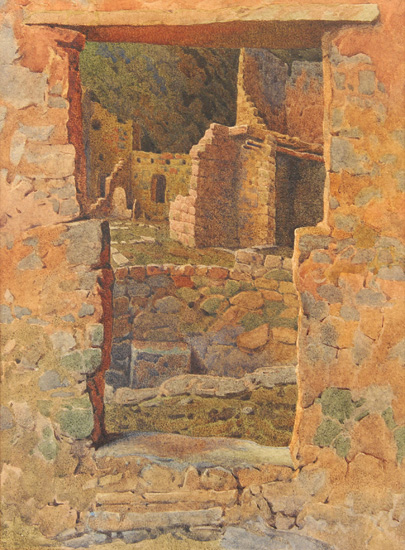