A painter, etcher, muralist, and sculptor, Gottardo Piazzoni was a highly prominent, active figure in the Northern California art world in the early 20th Century. Many of his paintings were plein-air, impressionist style California landscapes that were simple in composition and quiet in tone, reflective of his search for refuge from an increasingly mechanized society. He also created a number of paintings in the Symbolist style that expressed an ideal, dreamlike world of muted, restful colors.

He was born in Intragna, Switzerland to Swiss-Italian parents and got his early schooling in Locarno, Italy, where he was much impressed by local mural artists who decorated the churches of that city. In 1887, he emigrated to California with his mother to join his father who had established a dairy farm in Carmel Valley. He persuaded his parents to let him go to San Francisco to get art training, and from 1891 to 1893, he took art studies at the San Francisco School of Design under Arthur Mathews and Raymond Yelland, and won a Gold Medal for drawing. He became friends with fellow classmates Joseph Raphael, Xavier Martinez, Maurice Del Mue, and Granville Redmond.

He then went to Paris for three years to study at the Academie Julian with Benjamin Constant, Henri Martin, and Jean-Paul Laurens and from 1896 to 1898, studied with Jean-Leon Gerome at the Ecole des Beaux-Arts. In Paris, he shared studios with Douglas Tilden and Granville Raymond, with whom he would remain life-long friends in California. Returning to San Francisco, he shared a studio for ten years with his friend, sculptor Arthur Putnam (1873-1930) and was a member of numerous organizations including the Bohemian Club and the San Francisco Society of Etchers. His first major solo exhibition was in April 1905 at the Mechanics Institute Pavilion, and he made enough money to return to Europe, this time with his bride, Beatrice Del Mue (sister of Maurice Del Mue), and Arthur Putnam and his wife. The couples traveled for the next two years through Italy, France, and Switzerland.

In 1907, the Piazzoni's returned to San Francisco to deal with his studio that had been destroyed by fire. Relocating from Sacramento Street to Presidio Avenue, he began the first of his many mural commissions that reflected his commitment to the integration of art and architecture. He also gave studio classes, conducted plein-air painting excursions, traveled extensively in California for landscape subjects, began a series of monotypes, and took on teaching responsibilities at CSFA.

Piazzoni was a teacher at the California School of Fine Art in San Francisco from 1919 to 1935, and established in that city the Piazzoni Atelier d'Art on Sacramento Street. One of his major public accomplishments was the painting of ten large murals on the grand staircase of the downtown San Francisco Public Library. Completed in 1932, five of them depicted the "sea” and five the "land". Piazzoni died at his home in Carmel Valley, and in 1959, the California Historical Society held a retrospective of his work.

Source: "Artists in California 1786-1940" by Edan Hughes and "Plein Air Painters of California, The North" edited by Ruth Westphal. 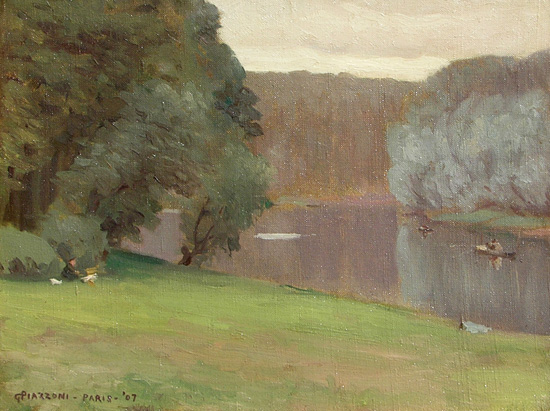