Most Americans are familiar with the sculptural contribution Glenna Goodacre (1939 - 2020) gave to the nation through her Vietnam Women’s Memorial installed in 1993 on the Mall in Washington, D.C.  Her 1999 design for the Sacagawea dollar contributes greatly to her renown.  Goodacre’s incredible range of work has made her enormously popular and very widely recognized.

Texas-born Goodacre began her artistic endeavors as a painter rather than a sculptor. She graduated from Colorado College and studied at the Art Students League of New York. Eventually she began to work in three dimensions, shaping portrait busts and figures in wax and clay, transforming herself from painter to sculptor. Central to her career, however, has always been an emphasis on the creative challenges of the human figure.

Goodacre has been awarded many important public commissions. In 1998 she created a seven-foot standing portrait of President Ronald Reagan depicted in casual riding attire for the National Cowboy Hall of Fame in Oklahoma City and Reagan’s presidential library in California. In 1997 Goodacre was selected as the winning sculptor in an international competition to create the Irish Memorial at Penn’s Landing in Philadelphia. This is Goodacre’s most ambitious public sculpture to date; it comprises 35 life-size figures documenting the potato famine in Ireland and the subsequent immigration of survivors to the United States.

Goodacre has been an academician of the National Academy of Design since 1994 and a fellow of the National Sculpture Society since 1981. She has won many awards at these institutions’ New York exhibitions.  Goodacre has received honorary doctorates from her alma mater, Colorado College, and Texas Tech University in her hometown of Lubbock.  In 2002, she won the James Earl Fraser Sculpture Award at the Prix de West Exhibition.  In 2003, she was awarded the Gold Medal for Career Achievement from The Portrait Society of America and the Texas Medal of Arts.  She was inducted into the Cowgirl Hall of Fame in 2003. 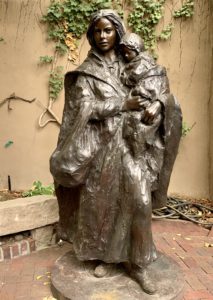