Gilles Cenazandotti was born in 1966 and grew up on the Northern Cape of Corsica. Over a ten-year period, Cenazandotti conceived site-specific design commissions with fashion designer, Jean Paul Gaultier at the same time he was realizing a series of interior fabrications with interior designer, Philippe Starck. Not only has he collaborated with Gaultier and Starck, but with Hermes and Printemps as well. He lives and works between Paris and Morsiglia, Cap Corse. His vision for translating mere objects, often considered as obsolete, into magnificent installations sets Cenazandotti apart from even the most progressive Contemporary artists working today. His works are frequently sculptures of endangered species, which are created out of items that the artist handpicks off Mediterranean beaches. Harvesting products found directly from the tidal overflow of debris, each sculpture and collage is formed by Cenazandotti’s preservation of each item. The artist does not alter the shape or color of any piece that he finds. The irony is that the extraordinary creatures are constructed of petroleum, oil and plastic based products that are destroying their habitats and the environment. Cenazandotti develops a reflection on the future of our planet and the evolution of our lifestyles that approaches science fiction, a universe necessary to the survival of man and species. His work attempts to show a complex, enigmatic nature, a technological paroxysm where man tries to imitate nature through artificial recreation. Gilles Cenazandotti is a force bridging lines of inquiry, an emerging talent, and dedicated activist. The artist’s recent investigations diversify and transform consumer culture into an expressive aesthetic experience that is rich with collective responsibility. 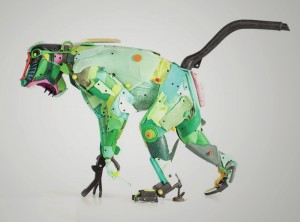 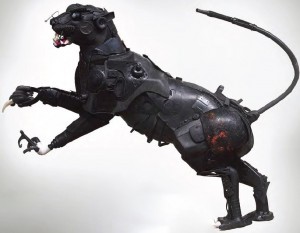 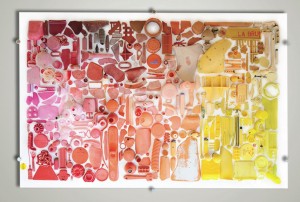 Large Collage
Structure in Polyurethane Cover with Objects Lost and Found from the Sea
47.25 x 70.875 inches 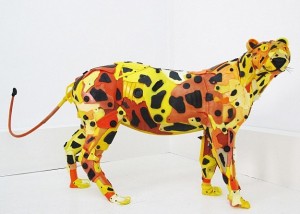 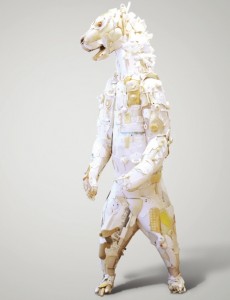