A descendant of French Huguenots and ancestors of the American Revolution, George Copeland Ault was born in Cleveland, Ohio, in 1891. When he was eight, Ault's family moved to London, England, where his father opened a printing company and thus introduced American printing techniques and American inks to Britain. Interested in art, Ault undertook a comprehensive study of drawing and painting at a variety of London's creative institutions, including University College, the Slade School, London University, and St. John's Wood Art School. He supplemented this formal training with visits to art museums in London and Paris where he could copy the work of recognized masters. In 1911, at the age of twenty, Ault returned to the States. He moved around New York and New Jersey until 1937, when he finally settled in the rural community of Woodstock, New York. He remained there until his accidental death by drowning in 1948. Throughout his life, Ault devoted himself to artistic production in oil, watercolor, and drawing. Preferring familiar subjects from the local landscape, Ault's work firmly roots itself in the American scene. However, his Cubist-Realist technique of portraying the natural world according to the underlying geometry of its forms shows an influence of European Modernism. Ault's early pictures were first exhibited at St. John's Wood Art School in 1908. The first American showing of his mature work occurred in New York in 1920, where the artist's individual approach earned positive attention. This trend continued, and the following year, he was honored by the Society of Independent Artists, who selected his work A New York Skyline for their show entitled "Our Choice of Independents." In his review of the exhibition, critic C. Lewis Hind commented that participating artists "promised that there was a future of American art away from the stereotype of the moribund academic productions of the day."1 Provincetown Waterfront depicts familiar elements from Ault's life in the summer community of Massachusetts. But rather than merely replicating an observation of houses along the shore, this watercolor reduces the scene to its primary elements, presenting only "the simple forms of which it was composed [and] leaving out all unessential detail."2 1 Quoted in a two-page typed information sheet given to the Frick Library by Milch Gallery on November 30, 1967, p. 1. 2 George C. Ault, quoted in a one-page information sheet, A Retrospective Exhibition: George C. Ault, Charlotte, N.C., The Mint Museum of Art, October 15 - November 15, 1950. 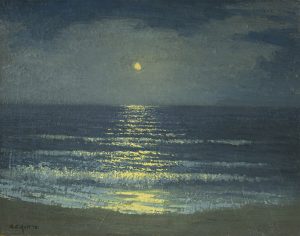