Frederick Morgan was born in London in 1847 to the British genre artist John Morgan (1823 - 1886).  Fred showed a keen interest in art and began studying with his father at an early age.  In 1865, at the age of 19, Fred exhibited his first painting, The Leaders of the Singing, at the Royal Academy.

After working for a number of years as a portrait artist, he finally hit upon his signature subject matter - scenes of happy childhood.  Out of Reach was one of the three works Morgan chose to exhibit at the Royal Academy in 1897.  We can imagine the little girl (seen only in three-quarter length) standing on her tippy-toes as she stretches to reach the pink rose that is just beyond her grasp.  With her big blue eyes and cherubic face, Morgan has captured the amazement, wonder and innocence of the young girl.  It was this ability to capture all these loving qualities of childhood in a soft and natural style that made Fred Morgan one of the greatest British genre painters of his time.

With his popularity ever increasing there was a constant demand for his work.  As a result, thousands of reproductions of his paintings of radiant childhood and domestic felicity were created and sold.  Three photogravures of his painting of Alexandra - the Princess of Wales - feeding her dogs in the grounds at Sandringham House were hung in Buckingham Palace.   The original painting was begun in 1901; exhibited at the Royal Academy in 1902 and subsequently purchased by the New South Wales Public Gallery. 1

A delightful conversationalist with a fund of anecdotes, Fred Morgan was a charming host, and the friends whom he entertained at his Broadstairs home derived new inspiration from his alert and vigorous mind, and his refreshing outlook towards life and art.  The pride he took in the beautiful garden in which his studio stood was part of his love for the idyllic side of life, which is reflected in his pictures.  A great lover of music, his home was the center of many interesting musical gatherings. 2

He was married three times.  His first wife was Miss Alice Havers (1850-1890), a brilliant genre and landscape artist. They were married in 1872 and had three childre­n; the eldest, a son, was also an artist and exhibited at the Royal Academy under the name Val Havers.  With his second wife (who died in 1905) he had two children.  His son, from this marriage, was also an art master.

Fred Morgan continued to paint up until his death.  His final painting, that of a little child, was finished only a week before his death in 1927 and was painted in his most finished style.  During his lifetime he exhibited more that 200 works at various exhibition: including the Royal Academy, the Royal Society of Oil Painters (of which he was a member) and the Manchester City Art Gallery. 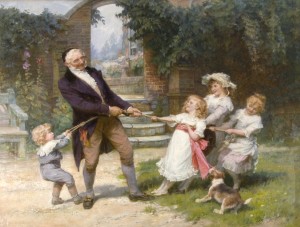