Part of a group of New York painters called "The Eight," Ernest Lawson was fascinated by the urban environment of early 20th-century New York and also the bucolic landscape of the Hudson River. His style was close to pure Impressionism, and many of his works focus on the influence of human beings on the landscapes, quite often with the suggestion that someone has just been a part of the scene.

He also completed numerous snow scenes as well as depictions of the less-than-beautiful side of life that including squatter's shacks, railroads and urban city views. Although he associated with the Social Realists led by Robert Henri, he did not adopt that subject matter as the focus of his painting. On his canvases, he used a palette knife and heavy impasto with bold, bright colors.

Born in Nova Scotia, he spent his boyhood in Ontario because his father, a doctor, had taken a job in Kansas City and Lawson decided not to move until he turned age 15. When he joined his family, he studied at the Kansas City Art Institute. The next year he travelled in Mexico with his father and worked as a draftsman and studied at the Santa Clara Art Academy. In 1890, he went to New York to enroll in the Art Students League and from 1892-1894, spent time at the summer school of Cos Cob, Connecticut with his friends and Art Students League teachers John Twachtmann and J. Alden Weir and other Impressionist painters at that art colony. There, he first painted "en plein air", meaning outside in the 'open air', and reportedly his exposure to new ideas at Cos Cob shaped the remainder of his career. From Weir, he heard these comments: "You are trying to get the whole world on one canvas. Simplify everything and stick to your first impressions." (Spencer, 165)

From 1893 to 1898, he was in France which included study in Paris at the Academy Julian with Jean Paul Laurens and Benjamin Constant. In Paris, he shared a studio with Somerset Maugham, who used him as the prototype for Frederic Lawson in his novel, "Of Human Bondage." In France, Lawson studied only briefly at the Academy and spent most of his time painting in the countryside pursuing his new love of working "en plein-air". Returning to New York City in 1894, he settled there for many years, living from 1898 in Washington Heights, which then was a rural area with much wooded landscape and grazing animals. He painted the bucolic landscape around him, especially the Hudson River in winter, and generally led a quiet life although he continued to travel including back to France and to Spain and throughout New England including Cos Cob, Connecticut and Cornish, New Hampshire. He also returned to Kansas City to teach at the Art Institute in 1926 and the Broadmoor Academy in from 1927 to 1928.

In 1908, he participated in the 1908 exhibition of "The Eight" at Macbeth Gallery. Unlike Henri and the other Social Realists of "The Eight," Lawson preferred vistas to intimate views and was the only artist in that exhibition who painted landscapes rather than street life. His affiliation with The Eight was interesting because most members of the group, excepting the highly individualistic Maurice Prendergast, were in rebellion against the prettiness of Impressionist landscape painting which, Lawson, of course represented.

In 1912-1913, he was one of the founders of the National Association of Painters and Sculptors. This organization planned the 1913 Armory Show that remains famous in art history for being a large-scale introduction of modernist art to the American public. In 1917, he was elected a Full Member of the National Academy of Design. In his later years, he moved frequently because he was troubled with personal, financial and health problems. He taught briefly in Hartford, Connecticut and was distraught because he could earn so little money. In 1939, near Miami, Florida, he died from drowning, which some thought suicide. From 1931, he had visited Florida regularly to seek help for his chronic arthritis and in 1934 had moved there. 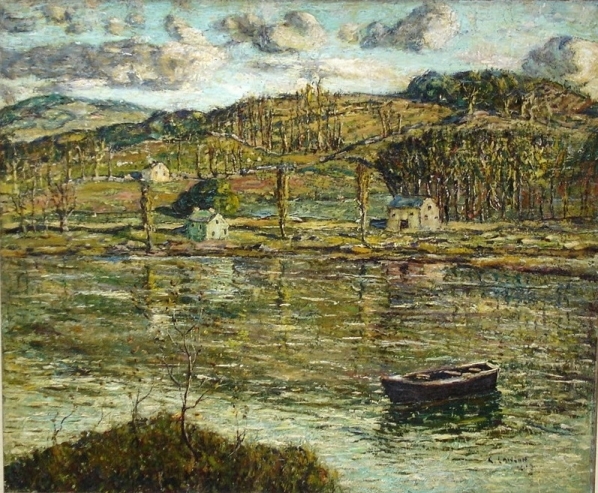