Born in London, England, to a wealthy family with ties to royalty, Brett became a noted long-time resident artist of Taos, New Mexico. She saw her first American Indian when she was age five attending a performance in London of Buffalo Bill's Wild West Show. She determined to be an artist, which was counter to her parent's social expectations of her, and she enrolled in the Slade School of Art in 1910 and graduated six years later. Titled the "Honorable Dorothy Brett," she also attended University College.

Brett began painting portraits of English celebrities including novelist D.H. Lawrence, and she went to Taos with him and his wife in 1924. It was to be a short visit, but she remained, becoming a U.S. citizen in 1938. She began painting Indian genre but was hesitant because her background was academic landscape and portrait painting.

She became a close associate of Mabel Dodge Luhan; Brett, Luhan and Frieda Lawrence became such close friend and fixtures of society in Taos that they were known as the "Three Fates." 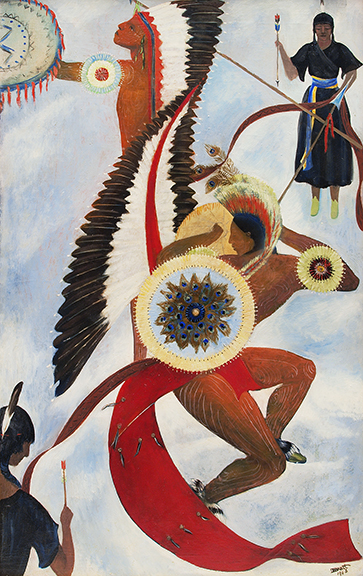