Barbara Latham was born in Walpole, Massachusetts and raised in Norwich, Connecticut. She studied at the Norwich Free Academy, and later attended Pratt Institute, graduating in 1919. Latham then studied at the Art Students League's summer school in Woodstock, New York, with modernist painter Andrew Dasburg.

Latham began her career as a commercial artist in New York, working for the Norcross Publishing Company. She also did illustrations for Forum magazine and the New York Times Sunday magazine. Latham was an adventurous woman, especially for her time; she traveled extensively to gather material, including a bicycle trip through Brittany with a friend.

In 1925, Latham went to Taos, New Mexico, to work on greeting card illustrations. There, she met artist Howard Cook, who was also looking for illustration ideas. Cook and Latham married in 1927. For several years, they traveled together, including trips to Mexico, Paris, Connecticut and the Deep South. They settled near Taos in 1933, and moved to Santa Fe in 1976.

Latham created many prints and paintings of New Mexico subjects, such as the Taos landscape, and genre scenes depicting rural life. She also illustrated children's books. The American Institute of Graphic Arts chose her book Maggie as one of the best books from the period of 1945 to 1950.

After World War II, Latham's work became more abstract. With minimal backgrounds and pure, bright colors, her work during this time had a new mood. She experimented with surrealism, emphasizing the interplay of shapes and colors.

Her one-woman exhibitions include Witte Memorial Museum, Dallas Museum of Fine Arts, Roswell museum, and Weyhe Gallery. Her work is included in numerous private and public collections, including the Philadelphia Museum of Art, Metropolitan Museum of Art, and Library of Congress. 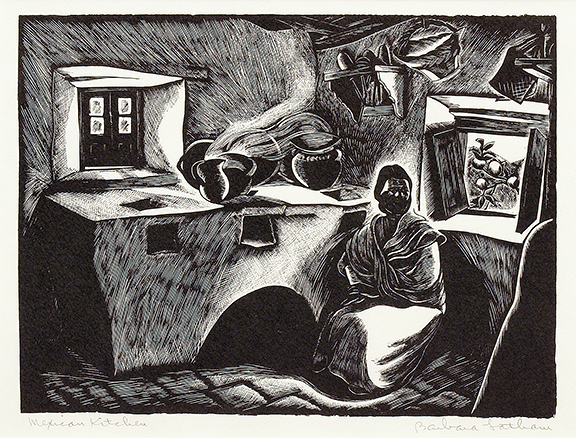