Czech painter, designer and decorator, one of the leading exponents of Art Nouveau.

He designed many posters, particularly for Sarah Bernhardt, carrying the decorative “whiplash” line to its furthest limits with twisting tendrils of flowers and bizarre undulations of hair.  He studied at the Prague and Munich Academies before moving to Paris (1887), where he worked with Laurens and at the Academie Julian, and soon became the pivot of the Art Nouveau movement.  Between 1904 and 1913 he paid several visits to the U.S.  After c.1910, Prague became his base and he turned to patriotic paintings in the academic manner.

One of the chief exponents of Art Nouveau, Mucha attained world renowned popularity.  He exercised his talents in many fields:  stained glass (for Champigneule in Paris), tapestries, jewels (for Sara Bernhardt, which were then executed by the jeweler Fogquet), and many posters (Job, Nestle, Lefevre-Utile, Benedictine and many others).  In 1904, he made the first of his six trips to the United States where as a decorator (for the Deutches Theatre in New York in 1908), poster artist (The Maid of Orleans) and a portrait painter.  In 1912, he returned to his native country to devote himself to what he hoped to be his life’s work: “The Slav Epic,” a series of large paintings of his country’s history.  After 1918, he designed stamps, police uniforms and banknotes for the Czechoslovakian Republic.  Many exhibitions in France, Japan, America, England, and of course his native Czechoslovakia have attested to the immense value of his work. 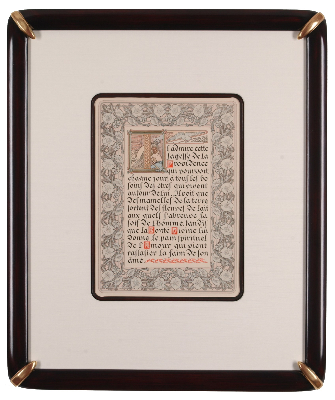