In 1859, at the age of 29, Albert Bierstadt accompanied a government expedition on a painting trip that would establish him as one of the most popular landscape artists of his time. He traveled with his sketch pad, paints and canvas on the back of a mule, past the Missouri River and deep into the Rocky Mountains of Wyoming. There he found his greatest subject matter, the mysterious, magnificent, forests, plains, indigenous wildlife and peoples of the West. His later journey from 1863 to 1870 to California proved to be a culmination of his Rocky Mountain efforts. Born in Germany, Bierstadt spent his childhood in New Bedford, Massachusetts. As a young child he returned to Europe for sophisticated art studies and extensive travel through the countryside and Alps of Germany and Italy. Following his 1859 trip to Wyoming, Bierstadt moved to New York from which he would make many excursions west - as far as California where he painted the first known rendition of Yosemite Valley in 1864. That same year, the artist's The Rocky Mountains sold for $25,000, the highest price yet paid for a work of art. Today, that painting is in the collection of the Metropolitan Museum of Art. Bierstadt's popularity introduced him to many famous people of the time, including the poet Longfellow, The Grand Duke Alexis of Russia and President Rutherford Hayes. Throughout his lifetime he traveled back and forth across the continent and to Europe with his wife Rosalie. Today, nearly every state owns a Bierstadt painting, either in public or private collections. 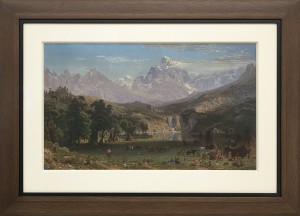