Marc Chagall was born in Vitebsk, Russia in 1887 and lived to be 97 years old. His style, while reflective of cubist, expressionist and surrealist affinities, is distinctly personal. His contribution to early modern painting and printmaking has been of the first order. Chagall studied briefly with a local artist in Vitebsk, and in 1908 studied at the academy in St. Petersburg. In 1910, he went to Paris, where he would live for most of the rest of his long life. There, he met the poets Max Jacob, Blaise Centrars and Andre Salmeon and the painters Modigliani, Delaunay, LaFresnaye, and other cubists and independents. The complexities of Chagall’s aesthetics are apt to be obscured somewhat by the whimsical fantastic subject matter. Although cubism had an early and formative influence upon his works, it did not detract from his uniqueness of expression. The impact of cubist structure and spatial handling is evident in I and my Village (1911) and Over Vitebsk (1916), both in the New York Museum of Modern Art. Thereafter, his style becomes increasingly unique and the cubist aspects operate less evidently.

Appollinaire introduced Chagall to Herwarth Walden, the German publisher and dealer, in Berlin in 1914. This resulted in Chagall’s first one-man show in the same year. He returned to Russia to marry. After the revolution of 1917, he was appointed Commissar of Fine Arts for Vitebsk and founded an art school there. He designed murals for the Moscow Jewish Theatre in 1922 and then left for Paris by way of Berlin, where he stayed long enough to make engravings as illustrations for a book. The poet Cendrars was responsible for Chagall’s meeting with the dealer Ambroise Vollard. His first retrospective exhibition was given at the Galerie Barbazange-Hodebert, Paris in 1924. His style became increasingly romantic and devoted to fantastic narratives during the middle 1920s. Chagall’s first lithography plates (30 in all 1922-23) were executed in crayon on lithographic paper. The Jewish Wedding (1926), a gouache and chalk composition, disclosed another tendency of his Russian origin. His first New York show dates from 1926. In 1927, he undertook the illustration of La Fontaine’s Fables, completing the 100 plates in 1930. In 1931, he traveled to Palestine and Syria to study themes for Biblical engravings, another Vollard commission.

By now, Chagall had become internationally famous, and a large retrospective in 1933 at the Basel Art Museum increased his prestige. He was disquieted, however, by political developments in Europe during the early 1930s and the increasingly severe persecution and threat of war lead him to paint religious works of a darkly exciting kind. His apprehensions were aggravated by a visit to Poland in 1935.

In 1939, the first prize in the Carnegie International, Pittsburgh, was given to Chagall, and in 1941, he settled in the United States at the invitation of the Museum of Modern Art. At first rejuvenated by his new environment, he was deeply saddened by the death of his wife in 1944. Before returning to Paris in 1946, he completed the sets for Stravinsky’s Firebird and other theatrical designs. He also produced 13 color lithographs for One Thousand and One Nights. On his return to Paris, Chagall went to master printer Mourlot, who was responsible for the revival of lithography after the war.

Chagall had retrospective shows in 1947 in Paris, Amsterdam, and London, and was represented at the 1948 Venice Biennial. In 1949, he worked in Venice, primarily with ceramics. In that year, he also painted an important canvas, The Red Sun. This was an allegory invoking memories of his late wife and the rich colored imagery of Russian folk fantasy, which was always so much a part of his art.

The 1950s brought additional honors to Chagall, not the least of which was the commission from the Joseph Neufeld and the Women’s Zionist Organization of America to design 12 stained glass windows for the synagogue of the Hadassah-Hebrew University Medical Center near Jerusalem.

Chagall had the rare ability to start each morning fresh as if each day was the first. He saw each flower as the most brilliant, each fruit as the sweetest, and each woman as the most beautiful. 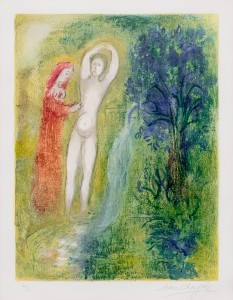 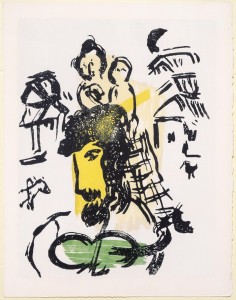 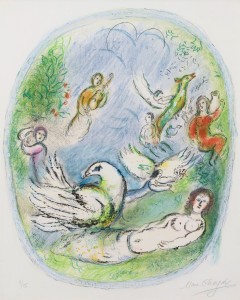 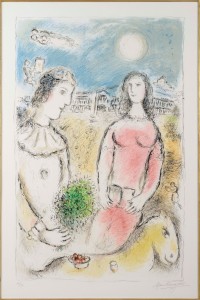 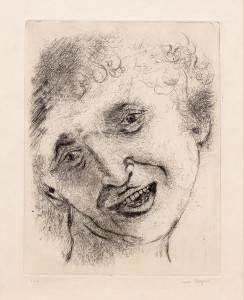 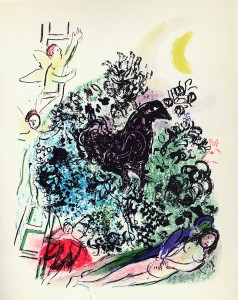 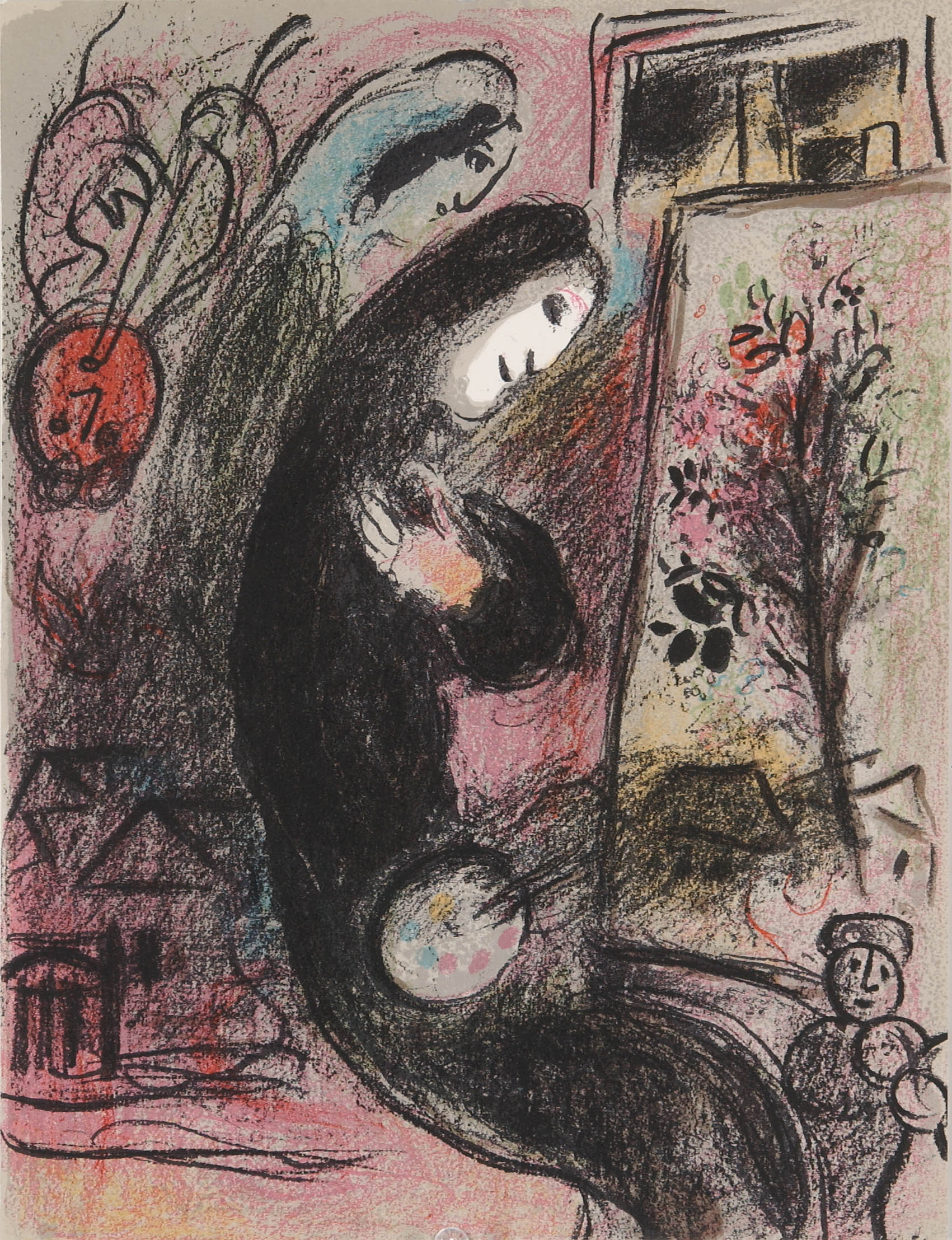 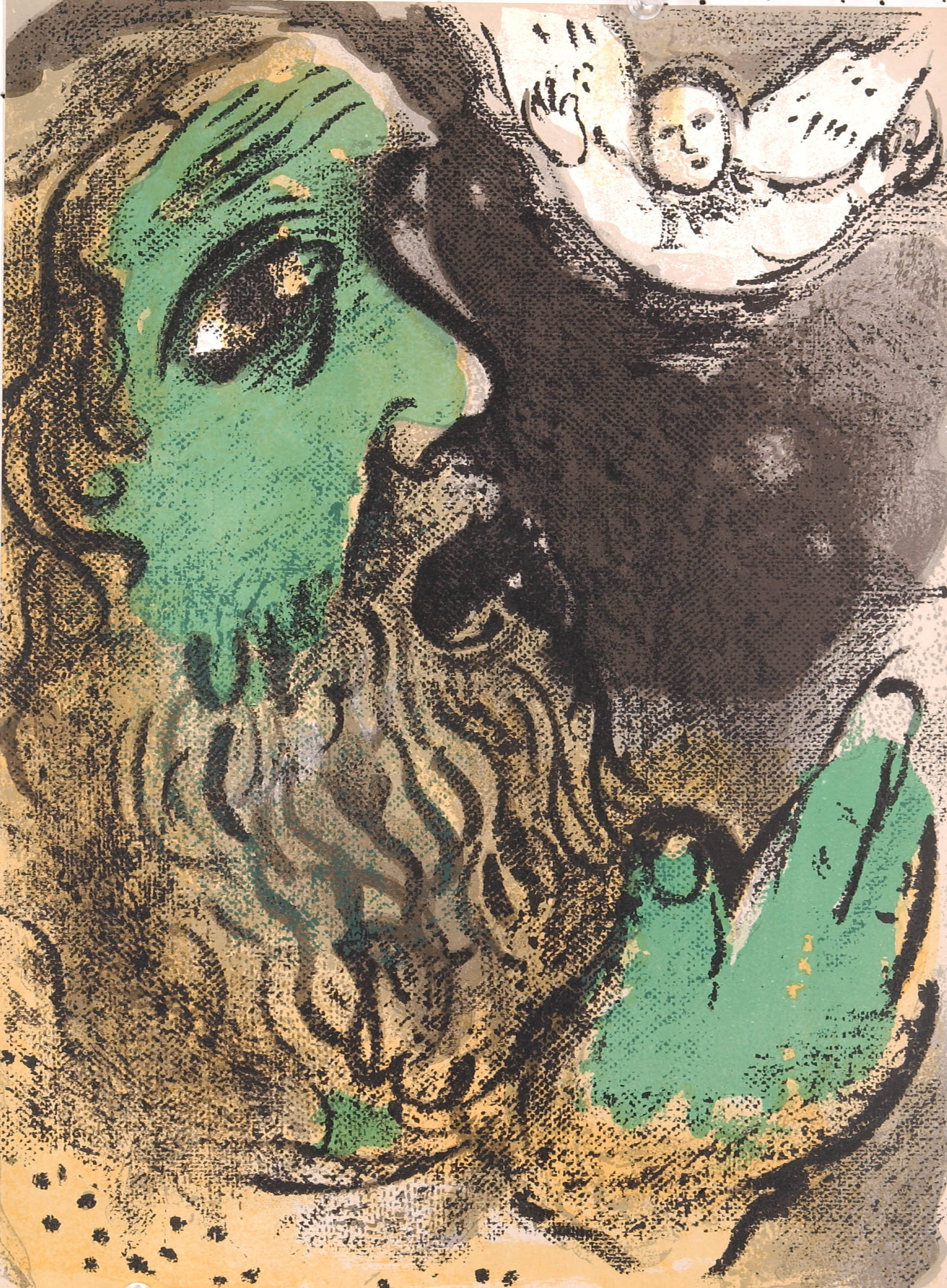 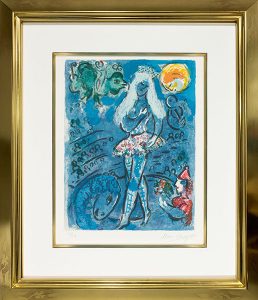