Luigi Lucioni was born in the northern Italian town of Malante, near Milan. His family immigrated to America when he was ten and settled in Jersey City, New Jersey. As a teenager, Lucioni helped support his family by working as an etcher for the New York Herald-Tribune, and from 1916 to 1920, he studied at the Cooper Union Art School. From 1921 to 1924, he was enrolled in life classes at the National Academy of Design. He studied etching with William Auerbach Levy and also worked under William Starkweather, an Impressionist artist who had worked with Joachin Sorolla y Bastida. In 1924, Lucioni was awarded a Tiffany Foundation scholarship, which enabled him to paint at the Tiffany estate on Long Island. The following year Lucioni traveled to Europe and spent two months in Italy. He studied the meticulous draftsmanship and technique of the Italian early Renaissance painters, especially Massaccio, Masolino da Panicale, and Piero della Francesca.

Lucioni returned to New York “frightfully interested in classic realism,”[1] and began to produce landscapes, still lifes, and portraits in his Washington Square studio. He gained the most recognition for his meticulously detailed, carefully composed, and vividly colored still lifes. He acknowledged that his early work in this genre was influenced by his study of Cezanne: “I began to do a lot of still lifes and his forced perspective I liked very much, sort of looking down on things.”[2]

Lucioni had his first one-man exhibition at the Ferargil Galleries in New York in 1927. His paintings quickly earned him national recognition and sold well, even in the difficult economic climate of the Depression. When The Metropolitan Museum of Art purchased one of his still lifes, Dahlias and Apples, in 1932, he became the youngest living artist to be represented there. Lucioni maintained a busy exhibition schedule, showing his work at group shows throughout the country, including those held at the National Academy of Design, Pennsylvania Academy of the Fine Arts, Corcoran Gallery of Art (biennials), Whitney Museum of American Art, and the Carnegie Institute. In addition to Ferargil Galleries, the Associated American Artists Gallery and the Milch Gallery also handled his work.

Lucioni visited Vermont for the first time in 1929. The rolling, verdant hills reminded him of his family home in Italy, and in 1939 he purchased a farmhouse in Manchester. There he painted landscapes in a crisp, detailed style that critics likened to photography. He maintained his studio in Washington Square until 1945, when he began to spend most of his time in Vermont. He continued to send his paintings to the National Academy of Design annuals until his death in 1988.

A modest, hardworking man, Lucioni decided early in his career that he wanted to be a realist. Despite the many different artistic styles and fads that he witnessed over the course of his life, his approach to painting remained remarkably consistent. He said, “…I never worried about whether I was stylish or not stylish. It didn’t make any difference to me. I just feel you do what you do, you are what you are.”[3] Lucioni perfected his realist technique by painting every day, and his disciplined approach is echoed in the technical virtuosity with which he executed his still-life arrangements.

In 1988, after the dispersal of the artist’s estate, many of his paintings were bequeathed to the Shelburne Museum in Vermont. Other institutions that own Lucioni’s work are The Metropolitan Museum of Art and Whitney Museum of American Art, New York; Carnegie Museum of Art; Library of Congress, Washington, D. C.; Fogg Art Museum, Cambridge, Massachusetts; and the Victoria & Albert Museum, London, England. 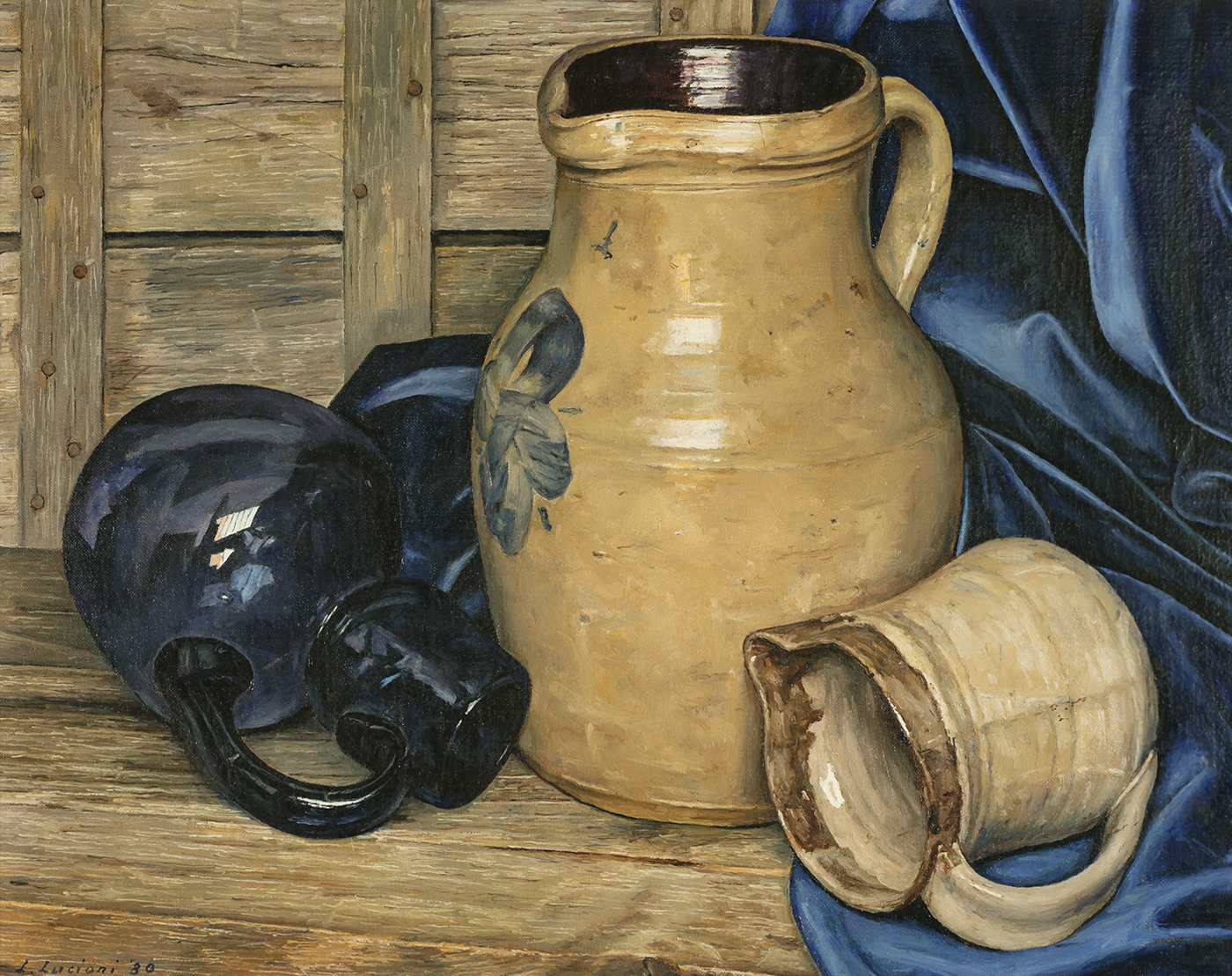